Breaches, however, are expected to raise cyber insurance premiums

Industry experts use words like “steady” and “consistent” to describe the commercial property and casualty insurance market in 2015.

“Overall the market is very competitive in virtually every area,” says H.B. Whitmore, president and managing partner of Willis of Virginia, a Richmond-based insurance broker.

The current “soft” market, which results in lower insurance premiums and heightened competition, is being fueled not only by ample market capacity — the supply of insurance available to meet demand — but also by an improving economy.

Brokers expect the soft market to continue into next year, with a few notable exceptions, such as insuring against cyber risks.

“There continues to be capital coming into the insurance marketplace, and as a result, buyers should see the general softening of the market to continue, barring any unforeseen catastrophic events,” says John Stanchina, president and CEO of Rutherfoord, a Marsh & McLennan Agency, in Richmond. “This excess capacity will likely continue to drive consolidation with both carriers and brokers, such as the merger of ACE Limited and The Chubb Corp.”

ACE announced in July that it would acquire Chubb for $28.3 billion in cash and stock, creating one of the biggest property-casualty insurance companies in the world. 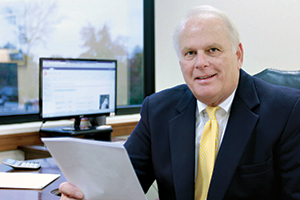 Rates in 2015 have been “stable to slightly down depending on the account itself,” says R.C. Moore, chairman of Tabb, Brockenbrough & Ragland, a Dawson Co./Assured Partners firm based in Richmond. “Good accounts are seeing decreasing in pricing, which I would expect to also see in 2016. Companies that have had losses are seeing increases.”

Most types of coverage have ample capacity, thanks to the low number of hurricanes and catastrophic events during this year. “There hasn’t been enough catastrophic activity to move the market,” says Charlie Fumagali, managing director/risk practice-DC Metro for USI Insurance Services in Falls Church.

“There is an old adage … that says ‘I rob banks because that’s where the money is,’” says Whitmore. “There is a huge amount of personal and credit information in those types of companies. That’s attractive to cyber criminals.”

Cyber insurance is one of the hottest trends in commercial insurance today. The insurance can aid companies in deferring forensic costs and provide help with credit monitoring, legal fees and lawsuit settlement.

“The wave of hacking attacks on U.S. companies over the past two years has prompted some insurers to increase premiums and deductibles and in some cases, depending on the type of business, restrict coverage availability,” Stanchina says. “There is also an increased focus on the risk management side of cyber. Brokers and carriers that have the tools to help guide clients on how to protect their networks will continue to win business.”

Eighty-one percent of health-care executives say that their organizations have been compromised by at least one malware or other cyber attack during the past few years, according to the 2015 KPMG Healthcare Cybersecurity Survey.

Millions of customer and employee records, for example, were stolen in cyber attacks on health insurers Anthem, CareFirst BlueCross BlueShield and Premera BlueCross BlueShield. As a result, insurance capacity for the health-care industry has been reduced.

“Coverage is still out there, but rates and capacity have tightened,” says Whitmore. “We have seen a huge increase in requests for helping companies and entities identify and quantify their cyber exposures.”

Moore continues to talk to clients about insurance protection for cyber exposure. “We are focusing on businesses being prepared if they have a cyber attack,” he says. “We want to make people aware that these kinds of things are happening. That will be one of our main thrusts in 2016.”

There have been some unusual recent breaches. “We don’t just see a breach of the typical information [employee and credit card data], but we also see exposure to sensitive information on the businesses and strategy,” says Greg Longest, senior vice president of Marsh in Richmond.

Because of these attacks, executives and their brokers need to “develop a risk profile, manage that risk and develop procedures to respond,” he adds. “If a cyber insurance policy is pursued, it is critical that the language is customized to meet the specific needs of each client’s risk profile.”

Another exception to the soft market involves proposed revisions to the U.S. Department of Labor’s Fair Labor Standards Act. “[The revisions are] expected to increase wage-and-hour claim filings, which could put pressure on employment practices liability coverage in late 2015 and early 2016,” Stanchina says. “Employers need to pay attention to the changing laws in this area.”

Insurance companies that underwrite policies outside the U.S. are also keenly aware of the threat of terrorism. During the last “hard” insurance market, which occurred after 9/11 in 2001, concerns about terrorism were just emerging. “That cost billions of dollars, and it caused a scare in the U.S., therefore shrinking capacity,” says Fumagali. “Nobody gave terrorism too much thought before 9/11. Now, everybody thinks about it automatically.”

There also is increased interest in political risk insurance. Political risks are the unpredictable threats posed by political upheavals or social change.

“Companies have more assets and exposures outside of the U.S. that are subject to political violence, trade restrictions and embargoes and confiscation of assets,” says Whitmore, noting that Willis and Oxford Analytica, an analysis and advisory firm, have introduced a new political risk model called VAPOR (Value at Political Risk).

The model helps companies assess and compare the financial implications of exposure to various political risks in a country, a region or around the world. For example, companies in Russia can expect to lose $30 in every $100 in investment as a result of international sanctions and trade tensions —  making it the riskiest of all the major emerging economies.

“A company can model its risk for exposures around data and analytics. Any time you can model and quantify helps us position our clients’ risk in the marketplace,” Whitmore says.

Many clients today want a broker and carrier “that can speak their language,” says Stanchina. “They want industry specialization. The risks in construction, for example, are vastly different than the risks in life sciences. We find that clients want a broker partner that understands the specific nuances of their business and is actively engaged in their industry.”

Overall, Moore of Tabb, Brockenbrough & Ragland is upbeat about the commercial insurance outlook for 2016. “People are more optimistic,” he says. “Things are beginning to awaken again, and as a result I think 2016 will be a better year.”