A sense of momentum

“In 2018, we saw notable growth in expansions and new business investment as well as innovation and collaboration across the region,” says Grig Scifres, a Virginia Beach attorney who is chairman of the Hampton Roads Economic Development Alliance (HREDA).

One highlight of the year was development in Virginia Beach’s 325-acre Corporate Landing Business Park as the result of the completion of high-speed undersea cables from Spain and Brazil.

Companies attracted to Corporate Landing include Canada-based data center developer PointOne, which plans to invest $80 million and create 60 jobs there. The project will involve construction of two, 31,000-square-foot data centers. The first phase is expected to be completed in the fourth quarter.​

Another company, Assured Communications Advisors International, a business and management services firm, is investing $52 million to open a 130,000-square-foot data center and corporate headquarters. The project is expected to create 30 jobs when completed in the fourth quarter.

The city last year made more than 50 economic development announcements that involved the creation or retention of about 1,000 jobs and more than $270 million in capital investment.

Bcause LLC, for example, is moving to a bigger headquarters, an 84,000-square-foot facility in the city. The digital currency company, founded in Virginia Beach in 2013, is investing $64.8 million in the project, which is expected to create 100 jobs.

“They will have 16,000 computers operational in their facility and utilize a lot of power,” says Ray White, the city’s business development manager. “The key element to getting the project was reasonable power. We are working with Dominion Energy to get a reasonable rate for their operations.”

Other major city projects included the opening of Town Center Phase VI, a $42 million investment that includes Zeiders American Dream Theater and 120 apartments as well as new restaurants and retail space. Last year also saw the reopening of the 91-year-old Cavalier Hotel after a $260 million renovation.

In addition, Tournament Sports is spending $68 million on construction of the almost 285,000-square-foot Virginia Beach Sports Center. The facility “will make us the leader on the East Coast for tournament sports,” says Taylor Adams, the city’s interim economic development director. 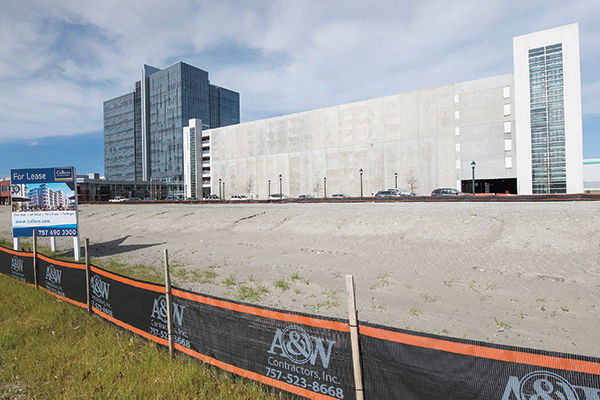 About 700 workers in Matthews, N.C., (former home of the company-owned Family Dollar store chain) received offers to relocate to Chesapeake. The  consolidation will be completed this fall.

Suffolk
Expansions were the main economic development focus in Suffolk as well. Wanchese Fish Co. is spending $2.8 million in expanding and establishing new corporate operations for its parent company, Cooke Seafood USA. The project will add approximately 70 employees during the next three years. “They are in the process of working on the project now,” says Kevin Hughes, Suffolk’s economic development director.

TowneBank also has expanded its corporate campus in the city, completing a $9 million, 44,000-square-foot office building. The bank expects to add more than 100 jobs during the next four or five years.

Also in Suffolk, Bluebell Ice Cream is building a 14,000-square-foot warehouse and distribution facility, a $14 million investment expected to create 25 jobs. The distribution center is scheduled for completion this year.

New York-based Columbia Care, a medical cannabis company, plans to open a dispensary this spring that would create 45 jobs. “They will be renovating and moving into an existing 65,000-square-foot facility,” says Robert Moore, the city’s economic development director.

Newport News
Last year was as “robust and energetic as ever,” says Florence Kingston, Newport News’ director of economic development. Major announcements during the year totaled $179 million in investments, which are expected to generate 540 jobs.

Also, Newport News Industrial, a subsidiary of the Norfolk shipyard, has completed a $20 million expansion project in Oakland Industrial Park, creating 120 jobs and adding 52,000 square feet to its existing facility.

“We are seeing continuing growth in our defense base,” says Kingston.

Building One of a planned 850,000-square-foot campus at the Tech Center Research Park is nearing completion. The nearby Jefferson Lab completed a $400 million federally funded upgrade, doubling the power of the existing facility.

Eastern Virginia Medical School, meanwhile, is building an $80 million, 138,000-square-foot education and academic building, and Children’s Hospital of The King’s Daughters is constructing a $60 million pediatric mental health facility scheduled for completion in 2022.

Meanwhile, Tegra Global invested $4 million in an expansion expected to create 300 jobs. In another development, a 20-story, $80 million downtown office tower being built by HL Development is scheduled to open in 2020.

Last year also saw approximately $40 million in improvements in downtown Norfolk hotels and the announcement that Miami-based Carnival Cruise Lines will begin two departures to Cuba in 2020. This year the cruise line will offer a series of trips from the city’s terminal.

Developer WVS Cos. is buying nine parcels from the city for a redevelopment project that will include more than 215 condominiums and apartments, around 17,000 square feet of commercial space and a restaurant. The initial investment is estimated at more than $35 million.

In addition, Hampton’s Phoebus area is turning out to be “one of the most eclectic areas in Hampton Roads,” says Chuck Rigney, the city’s director of economic development.

Phoebus is home to a number of new restaurants and shops as well as Fort Monroe, “one of the most unique real estate opportunities in the country,” Rigney says.

A $17.3 million Element by Westin hotel is under construction in Peninsula Town Center, and a $16 million Hyatt Place hotel has opened in the Coliseum Central area.

The area near the Hampton Coliseum will be a “huge focus of mine for 2019,” says Rigney. “We have 20 acres we will be marketing this year. We want to make it a destination location.”