It is fun to be No. 1. Virginia had a taste of life at the top back in 2007 when CNBC named Virginia the “Top State for Business.” That was the first year the business-news network conducted such rankings.

Nowadays there are a lot of annual rankings of the best states for business. Virginia’s top-ranked performance has slipped lately for many reasons, including its cost of living and the effects of federal budget cuts. The 2017 CNBC ranking, for example, ranked Virginia seventh among the 50 states. That actually was an improvement. The year before, the commonwealth was No. 13.

In an effort to get Virginia back to the top of these rankings, the Virginia Economic Development Partnership and the Virginia Chamber of Commerce asked for a study by Virginia Tech’s Pamplin College of Business.

The study’s mission is partly a marketing effort. The commonwealth wants to regain its bragging rights as a top-ranked state. But officials also want to use the rankings to learn how Virginia stacks up to other states on many measurements so they can address its weaknesses. “You need to be competitive with what other states are doing, at least in your region,” says Robert Sumichrast, Pamplin’s dean.

Pamplin has been working on the study since 2016. Stephen Moret, VEDP’s president and CEO, says Pamplin’s first report calls for the state to create a custom workforce-training system, invest in infrastructure such as broadband and do a better job of economic development marketing. Moret says VEDP may ask Pamplin for more analysis this year or next.

None of these findings are groundbreaking, but they offer confirmation that advocates of these goals are on the right track. The ranking study “is focused on laying out what it would take to get Virginia back to the top,” Moret says.

Barry DuVal, president and CEO of the Virginia Chamber of Commerce, says the study is not about “chasing the rankings. We are allowing the rankings to identify any deficiencies and then working to improve those deficiencies.” For example, Virginia once ranked among the top 10 states for its legal climate, but the commonwealth has since fallen out of that elite group, DuVal says.

And location matters in these rankings: This year Forbes ranked Virginia fifth in the nation — at first glance, a pretty good showing, until you notice that the top-ranked state was neighboring North Carolina.

U.S. News & World Report has its list, too, currently ranking Virginia No. 11. Virginia generally gets high marks for its workforce and quality of life, but lower marks for cost of living, infrastructure and a generally weaker economy in recent years.

The CNBC ranking is more transparent than most, says Kevin Carlson, associate dean for research and faculty affairs at Pamplin. The network website shows how a state ranks in each of 10 categories and how it performed in previous years. One of the reasons that Virginia climbed to seventh in the CNBC ranking is its improving economy, which jumped from 30th to 20th in the nation.

Understanding the rankings is helpful, but there are limits to what state leaders can do. “There are very few things that the state does directly; what it is trying to do is influence investment and other kinds of things,” Carlson says. “They’ve got to be able to signal effectively” to businesses “and try help when they can help. It’s a very complex job, and it’s always changing.” 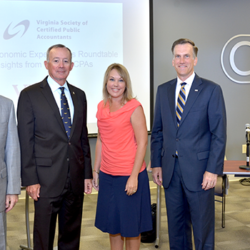 CPAs flesh out this year’s survey