The arrival of the railroad in the early 1880s launched Roanoke as a modern city, and it shouldered the regional economy well into the 20th century. By 2015, however, Carilion Clinic had long surpassed Norfolk Southern as Roanoke’s biggest employer. The departure of the administrative jobs dealt a blow to the Roanoke Valley, but it was one that was long expected and could be absorbed by an increasingly diverse regional economy.

A year and a half after Norfolk Southern’s announcement, the valley’s economic metrics look more robust than at any point since before the Great Recession. In May, the Roanoke area’s unemployment rate stood at 3.5 percent. In 2010, by comparison, the average jobless rate for the year was 7.6 percent.

Credit that improvement to many factors, including a shift in economic development strategy and a messaging campaign that’s transformed the community’s perception of itself.

In 2010, the Roanoke Regional Partnership launched its Roanoke Outside campaign to emphasize the valley’s outdoor amenities and quality of life, with the goal of making the region seem hip to young professionals looking for places to hike, bike and spend time outdoors.

After near misses, two wins
After near misses with Sierra Nevada Brewing Co. in 2012 and Stone Brewing in 2014, the Roanoke area has attracted two major breweries this year. Bend, Oregon’s Deschutes Brewery and San Diego’s Ballast Point Brewing and Spirits announced they would build East Coast production facilities with restaurants in the area.

In addition to promising new jobs, the brewery announcements also have built confidence in the growing number of Roanokers who see the Star City as a hip outdoors mecca. Over the last decade, craft brewers have become closely entwined with the culture of outdoor recreation. The connection extends from craft beer tents becoming a regular feature at the finish line of bicycle and foot races, to breweries using outdoor imagery as a focus in marketing, to the location of production facilities and pubs in communities pegged as “outdoor cities.” Roanoke’s success in attracting Deschutes and Ballast Point not only solidifies its growing national reputation as an outdoor town, but also reinforces the community’s perception of itself as such.

“The transformation of messaging of this region, from an old railroad town to a livable outdoor-oriented community, has had an impact,” says Beth Doughty, executive director of the Roanoke Regional Partnership. “People feel more of a sense of pride and understanding of the community narrative. They’re ambassadors for the community narrative. Also, this outdoor narrative is being monetized by attracting businesses like [outfitter and gear consignment shop] Roanoke Mountain Adventures, and it’s attracting companies like Deschutes. If we hadn’t documented this outdoor branding, we wouldn’t have been a good match for Deschutes.”

In fact, finding the right cultural fit was a top priority for Deschutes, says Michael LaLonde, the company’s president and COO. The brewery, which plans to build an $85 million facility and hire 108 workers, assigned a group of the  co-owners — its employees share ownership in the company — to look at various East Coast cities.

“We wanted them to think about how to translate our culture to an East Coast facility,” LaLonde says. “We invited them out to take a tour of each city and give us an opinion of where to locate.” 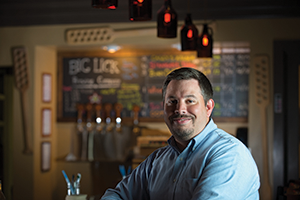 During the multiyear process, news leaked that Roanoke had made Deschutes’ short list, along with Charlottesville and Asheville, N.C. That led Michael Galliher, a local government employee and beer enthusiast, to start a social media movement. Residents and companies around the region filled social media with positive images of Roanoke, branded with Galliher’s hashtag, #Deschutes2Rke.

“We didn’t target Virginia specifically in the beginning,” says Hilary Cocalis, Ballast Point’s vice president of marketing. “Really the reason we picked the location that we did came down to a number of factors. The folks in Virginia at the state and county levels were great to work with. The site itself checked all the boxes we were looking for in terms of infrastructure. We checked off other items on our list: quality of life, quality of water, things with the actual site and building, freight location, all of that. It was a perfect storm.”

Part of the region’s success in winning Deschutes and Ballast Point stems from its close call with Sierra Nevada four years ago. After that, the Roanoke Regional Partnership began targeting breweries and showcasing the valley’s water quality and wastewater capacity.

Deschutes will build at the Roanoke Centre for Industry and Technology, an industrial park along U.S. 460 on the city’s east side. Ballast Point will locate north of Roanoke in Botetourt County, in a 240,000-square-foot building on an 81-acre site in Greenfield, a business park and government center north of Daleville.

Greenfield also attracted Eldor Corp., an Italian auto parts manufacturer that is building on a 53-acre site in the park. The company expects to invest $75 million and create 350 jobs during the next five years.

Colleges’ role
A key element of Roanoke’s pitch to the breweries and Eldor were the region’s colleges and universities. Virginia Western Community College’s mechatronics program stands as one example of business partnering with higher education to produce skilled, employable graduates ready to go to work. 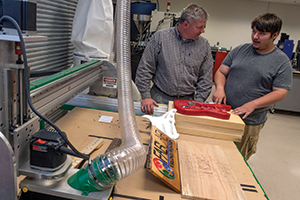 Botetourt, however, already is moving to develop new sites to attract business. It’s marketing a building on U.S. 220 previously occupied by Lumos Networks.

Nearby, the interchange at Exit 150 on Interstate 81 is undergoing a dramatic makeover to improve the traffic flow at a major stop for tractor-trailer trucks. Larrowe sees the potential for development of destination retail, which he says generally is lacking on I-81 between Abingdon and Winchester.

“If done correctly, we will end up being able to get folks off of the interstate, as well as being an entry point not only for Botetourt but for folks on U.S. 460 and people in Roanoke,” Larrowe says. “There are endless possibilities. A lot of commercial is what I’d anticipate: destination retail, services, entertainment, anything and everything that would actually try to make that a special location.”

Botetourt’s success in attracting prospects to large, vacant parcels in an industrial park points to the importance of site availability in economic development. Other business parks in the region have filled over the years, some to capacity.

On the other side of Roanoke, Franklin County has invested nearly $11.2 million to acquire and prepare roughly 554 acres for a business park between Boones Mill and Rocky Mount. The county estimates it will attract $320 in private investment and create 2,200 jobs during the park’s lifetime.

Regional authority
Additionally, Botetourt, Franklin and Roanoke counties and the cities of Roanoke, Salem and Vinton are working together through the Western Virginia Regional Industrial Facility Authority to identify and develop more potential sites for industrial and commercial development. The authority also allows members to form individual agreements to share costs and revenue at sites.

That gives landlocked cities, for instance, the ability to assist and benefit from developable open space outside their boundaries. Meanwhile, localities also are making individual investments to upgrade their schools, libraries and other quality-of-life amenities.

Roanoke also has taken strides to shake up land use in neighborhoods near downtown. It has used historic tax credits as incentives for developers to reinvent vacant warehouses and office buildings. The city also is seeing results from nearly 20 years of investment and planning in its South Jefferson corridor. There it used land swaps and the power of eminent domain to acquire properties that now are being redeveloped. The Virginia Tech Carilion School of Medicine and Research Institute are driving spinoff growth, including The  Bridges, a 23-acre, $150 million mixed-use development on the Roanoke River.

The city has extended its “downtown” designation down Jefferson Street to the Roanoke River, suggesting a direction for growth south from the city’s thriving market district, which has been given an infusion of new energy by the construction of a new Hampton Inn on top of a parking garage and the construction of a new amphitheater in a redeveloped Elmwood Park.  The new motel is slated to open this summer, and the amphitheater has attracted acts such as Sheryl Crow, Old Crow Medicine Show, Blondie and Huey Lewis and the News.

NRV seen as a hot spot
The New River Valley has weathered economic challenges to score some wins of its own. After two announced expansions in two years, Volvo Trucks announced layoffs of more than 700 employees in 2015. That number eventually dwindled to 500, but then a second round was announced in late spring.

Despite that, employment in the New River Valley remains strong. The jobless rate was 4.1 percent in May, down from a yearly average of 8.3 percent in 2010.
There have been smaller companies and smaller expansions around the region helping carry the load,” says Charlie Jewell, executive director for the NRV Economic Development Alliance.

In June, Area Development magazine ranked the NRV Metropolitan Statistical Area as 30th out of 394 among the hottest places for new and expanding businesses. Of midsized metros with populations between 160,000 and 600,000, it ranked 12th.