Home News A new king in the peanut capital?

A new king in the peanut capital?

The aroma of freshly roasted peanuts still wafts through Suffolk, but the Peanut Capital of the World now gravitates toward a new export. The city’s economy is getting a caffeinated jolt from its flourishing coffee manufacturing and processing industry.

Coffee beans soon may even overpower the peanuts, as Suffolk ramps up its manufacturing and food and beverage processing industries. In December, Peet’s Coffee announced plans to build a $58 million roastery in Suffolk’s CenterPoint Intermodal Center. The Emeryville, Calif.-based craft-coffee brand expects to hire 135 workers to run the 175,000-square-foot facility, its first on the East Coast.

Suffolk beat out communities in five other mid-Atlantic states to secure the project. Peet’s decision largely was swayed by Suffolk’s proximity to the Port of Virginia plus the city’s skilled workforce, available sites and existing coffee culture. Caffeinated companies — including J.M. Smucker, Massimo Zanetti Beverage, Lipton, Continental Terminals, Pacorini, Vitex Packaging Group, and Crown Cork and Seal — already have established processing, packaging and logistics operations in Suffolk, leading the city to claim a new moniker, “Caffeine Capital of the World.”

Agriculture remains a significant economic driver in Suffolk, but Suffolk’s days as a sleepy farming community are long gone. In addition to food and beverage processing, the city has put out the welcome mat for a multitude of industries, including warehousing, distribution, advanced manufacturing, hospitality, medical services, retail, and modeling and simulation. “It’s a large but realistic list of target industries, and we’ve seen growth and opportunities in them,” says Kevin Hughes, Suffolk’s economic development director.

Suffolk, in fact, is hitting its industrial targets already. In 2015, 91 new and expanding businesses brought nearly 2,000 jobs to the city along with almost $190 million in capital investments. Among them is Target Corp., which added 600 jobs and invested $50 million to expand its distribution center.

Bustling intermodal center
Much of the growth is taking place at CenterPoint Intermodal Center where Peet’s Coffee will build its roastery. The 900-acre logistics center recently became the state’s first certified industrial site, meaning all major infrastructure components are in place. “CIC-Suffolk has not only met all the infrastructure requirements for in-place utilities and roadways but also has the only pad-ready site that can accommodate a 350,000-square-foot building,” says Bob Harbour, CenterPoint’s senior vice president for development. “It sets us aside from other developments around the state and the mid-Atlantic.”

CenterPoint is about 40 percent full. Ace Hardware, Nexcom and office furniture and equipment manufacturer Friant & Associates have facilities there, while Emser Tile expects to open its East Coast distribution center next month. “We look forward to more growth as the U.S. economy improves and global trade increases in the near future,” Harbour says.

Business expansions lead to residential growth, which in turn attracts more retail development. “Ultimately, the top two business and industry attractors to Suffolk are the city’s steady population increase and location,” Hughes notes. “You can easily move people and product very efficiently.” One of Virginia’s fastest-growing cities, Suffolk has about 90,500 residents, a nearly 40 percent increase since the 2000 census. Another 40 percent surge is expected by 2040.

The influx of new residents has led to a housing boom of sorts, with construction centered on downtown, central and northern Suffolk. Residents have a variety of options, ranging from downtown apartments to single-family homes. Farmland also is available for those preferring a more bucolic lifestyle.

Suffolk’s array of homes, along with growth and the quality of its schools, led consumer advocacy site NerdWallet to rank the city 19th on its 2015 list of the Best Cities for Young Families in the commonwealth. NerdWallet also named Suffolk a top city for veterans in 2015.

Downtown redevelopment
Meanwhile, downtown Suffolk is attracting the attention of developers. The Monument Cos. and Sensei Development, for example, have created more than 150 downtown apartments during the past five years. Specializing in historic rehabs, Monument and Sensei have invested more than $24 million in downtown Suffolk, redeveloping 165,000 square feet of commercial and residential space.

Their projects include Washington Square, which transformed seven buildings along a West Washington Street block into loft apartments and retail space in late 2014. The $9.5 million development marked the largest private reinvestment in downtown Suffolk in 15 years.

“We’re fortunate to find good developers who are breathing new life into vacant and abandoned real estate,” Hughes says. “Downtown has a lot of character. It’s quirky, and there are opportunities for independent retailers to take advantage of that.”

There may even be an opportunity for Franklin-based Paul D. Camp Community College to open a downtown Suffolk campus. That would further stimulate downtown activity, but Hughes says the city and the college are not ready to commit to the idea. To help determine its next course, the city plans to conduct a downtown initiative study. A similar study 15 years ago led to the construction of a Hilton Garden Inn and the renovation of the former Suffolk High School into the Suffolk Center for Cultural Arts. 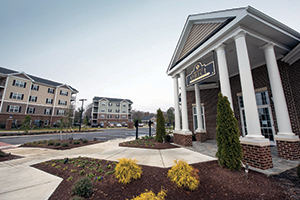 A few miles from downtown, another mixed-use development is under construction at the former Sentara Obici Hospital site. After lying dormant for more than a decade, the 27.5-acre Main Street property is being transformed into Obici Place. Meridian Obici, a 224-unit apartment development by Waverton Associates, opened last summer on part of the site, while eight acres have been set aside for commercial development. Hughes says that will give Obici Place a town center vibe. “There will be a lot of urban-scale pedestrian friendliness themes attached to it, but ultimately, our town center is in the historic downtown.”

Venture Realty Group has contracted to purchase the commercial section at Obici Place, with closing expected early this summer, says Mike Culpepper, the firm’s managing partner. German grocer Aldi is slated to anchor the development, while deals with other businesses are in the works. “We are working on commitments from two users, with a number of prospects looking at these spaces,” he says, adding that the Main Street corridor is “buzzing with new retail.”

The city purchased the Obici property for $4.5 million in 2005 — three years after the hospital opened a new facility on Godwin Boulevard — and sold it the next year to a Norfolk developer who envisioned a mixed-use plan. When that did not happen, in 2008 the developer sold the property back to the city, which conveyed it to the Economic Development Authority in 2013.

A group of residents promoted the idea of turning the site into a park, with hiking trails, benches and a gazebo for concerts. The city, however, ultimately decided a mixed-use development would better meet the needs of its growing population. “We found that people who have jobs in the central part of the city were commuting from Chesapeake or other nearby cities,” Hughes says. “With Obici Place, we’re offering an inventory that we didn’t have before.”

Although a park at Obici Place was a no-go, the city still considers recreational amenities a priority. “There has been a lot of time and effort invested in the quality of life from a recreational standpoint over the last 10 years,” Hughes says, noting the construction of two recreation centers and the conversion of former rail beds into the Suffolk Seaboard Coastline Trail, which will eventually cover more than 11 miles from downtown to the Chesapeake city line.

Harbour View
Meanwhile, retail is flourishing in Northern Suffolk’s Harbour View area. The past few years have seen the mixed-use Hampton Roads Crossing project welcome a 123,000-square-foot Kroger Marketplace. It anchors a shopping center that includes DSW Designer Shoe Warehouse, Ulta Beauty, Michaels, Ross Dress for Less, Petco, Texas Roadhouse and Zaxby’s. The retail center is next to a walkable neighborhood of single-family homes, town homes and apartments. North of Hampton Roads Crossing, the city is preparing a 55-acre site adjacent to the James River. Master plans call for Point at Harbour View to include space for research and development, offices and retail. 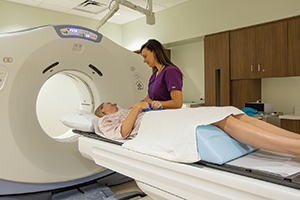 Health care also has made a significant imprint at Harbour View. Last fall, Bon Secours Hampton Roads opened its $20 million Bon Secours Cancer Institute, giving patients a one-stop, central location for care. “Here we are in the middle of a community that is growing, and our patients won’t have to go very far to get care,” says Marylou Anton, director of oncology services for Bon Secours Hampton Roads.  “They can see their doctors and get radiation or chemotherapy here without having to move their car. We’re trying to make it as pleasant as possible and incorporate cancer into their life, not let their life be run by a cancer diagnosis.”

Bon Secours expects the cancer center to provide 8,000 radiation therapy treatments annually, along with chemotherapy and other advanced cancer services. The American Association for Cancer Research says western Hampton Roads is one of three colon-cancer hot spots in the U.S., while a 2014 Virginia Department of Health report determined that the area has some of the state’s highest cancer morbidity and mortality rates. “With the volume of patients moving here, those rates will continue to grow,” Anton notes. “We’re putting a footprint here to help people as well as work on community education and prevention.”

The cancer center is part of the 23-acre Bon Secours Harbour View Medical Plaza, which includes diagnostic services, two primary-care physician practices, 13 specialist practices ranging from plastic surgery to gynecologic oncology, a weight-loss program and an emergency department. “Harbour View is a significant growth area, and we realize that we can better serve the community by putting resources out there,” says Lynne Zultanky, Bon Secours’ administrative director for marketing and public relations. She adds that the population in the ZIP codes surrounding Harbour View is expected to grow by 7 percent between 2013 and 2020.

More signs of the persistent growth pervade the 430-square-mile city. “We like to say that we’re a fast-growing city that’s home to fast-growing companies,” Hughes adds. “It’s hard not to be excited that people want to live in your community. It says we’re doing something right and that more people want to be a part of it.”