Home News Industries Government A new era for the ERA

A new era for the ERA

Once left for dead, the proposal has regained momentum

Kati Hornung remembers people canvassing for the Equal Rights Amendment (ERA) when she was a child. She lived in North Dakota, which ratified the amendment in 1975, so she thought it had made it into the U.S. Constitution.

“It was only five years ago I realized it wasn’t in the Constitution, and I was shocked,” she says.

The ERA, passed by Congress in 1972, seeks to enshrine equal rights for women in the Constitution. The proposed amendment was left for dead in the 1980s after two deadlines passed without the required three-fourths of the  states, 38, ratifying it. Nonetheless, the ERA cause has been revived in recent years.

Hornung, now a Virginia resident and the mother of two daughters, is leading the VA ratify ERA campaign to make the commonwealth the 38th state to approve the amendment.

Depending on whom you ask, the amendment will have to overcome several barriers before it can become the law of the land. Those impediments aren’t stopping local advocates, however.

“Laws can be changed as easily as legislators change their mind,” says Del. Jennifer Carroll Foy (D-Woodbridge), who is sponsoring an ERA resolution in the House this session. “The difference is there’s [now] a huge push and a concerted effort by advocates across the country to help make sure that the message is being heard and understood.”

The ERA has gained momentum in the wake of the #MeToo movement protesting sexual harassment and sexual assault and the recent wave of women being elected to political office.

However, advocates in Virginia were pushing for the amendment well before that. The amendment has been passed five times in the state Senate since 2011, most recently in 2016.

“I am certain that the current cultural context is playing some sort of role but here in Virginia, there have always been women working on this ratification,” says Hornung.

But the ERA isn’t being supported only by women. State Sen. Glen Sturtevant (R-Richmond) is introducing a similar resolution in the Senate.

Sturtevant says prohibiting gender discrimination in state and federal laws isn’t enough. The constitutional amendment would ensure equality for all Americans, he says.

“I’m hopeful that folks will continue to evolve on this issue and recognize that this really is a fundamentally American principle,” he says. 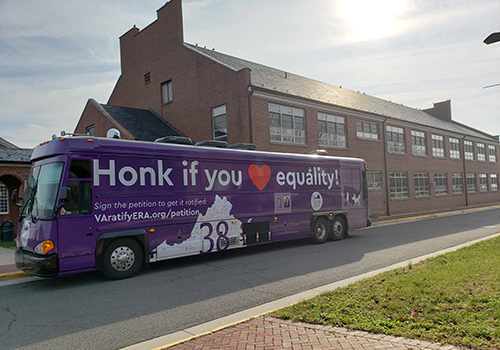 Foy and Sturtevant participated in VA ratify ERA’s 10-day November bus tour, which sought to drum up support for the initiative. The purple bus — splashed with the message  “Honk if you [heart] equality!” — made 38 stops throughout Virginia.

The VA ratify ERA campaign had collected roughly 5,600 signatures as of early December for a petition supporting the amendment. The goal is to gather 20,000 signatures before the General Assembly session begins Jan. 9.

A recently released poll suggests the campaign is working. The survey by the Judy Ford Wason Center for Public Policy at Christopher Newport University found 81 percent of the respondents favor ratification.

Gov. Ralph Northam also wants to see the amendment passed. “The word on the street, as we say, is that there’s support from both sides of the aisle,” Northam says.

Pros and cons on ERA

The question is whether there’s enough support. Since 2011, the full House has never voted on the ERA. The Senate has passed resolutions since then, but the measure didn’t make it out of committee last year.

Del. Mark Cole (R-Spotsylvania County) didn’t support hearing the resolution in a House committee last year because of the amendment’s lapsed deadlines. The original deadline for 38 states to ratify the amendment was 1979. When that timeline wasn’t met, the deadline was extended until 1982. Five states also have rescinded their ratifications. Cole says that means there’s not enough support for the amendment.

“Some ERA proponents want to ignore facts they do not like, such as the ratification deadline and that five states withdrew their ratification,” Cole said in a statement to Virginia Business. Cole says he supports equal rights but believes Congress must resubmit the ERA to the states for ratification before it can be considered by the Virginia legislature.

“ERA proponents should spend their time lobbying Congress and not trying to get the General Assembly to pass a resolution that would have no effect or, worse, spark a series of costly and divisive lawsuits,” he says.

Advocates, however, say the expired deadlines are irrelevant because they weren’t included in the amendment.

Many supporters also cite the passage of the 27th amendment, which regulates the pay of congressmen. That change was ratified in 1992, more than 202 years after it was proposed.

Proponents also say that Article V, which sets the process for changing the Constitution, does not require a deadline and note that a fully ratified amendment has never been kept out of the Constitution.

The impact
Another question that has no clear answer is: What effect will the amendment have if it finally is adopted?

Opponents fear it could have negative repercussions. They argue females could be drafted into the military or lose certain contracts awarded to women-owned businesses.

Saikrishna Prakash, a University of Virginia law professor, says the amendment could affect any policy favoring one sex over the other. Currently, it’s legally easier to justify affirmative action based on gender than race, he notes.

“It’s symbolic for people,” Prakash says about the push for the amendment. “They want to know the governments can’t draw these distinctions, but no one can say with certainty what this language will mean for concrete cases until the courts decide those cases.”

Only time will tell whether Virginia will lead the change and what it will all mean.

Move halts all proceedings for evictions, foreclosures due to pandemic