Civil War museums combine in a common cause

The merger of two Richmond museums, the American Civil War Center and the Museum of the Confederacy, announced last fall, makes perfect sense on paper.

The combination will benefit both nonprofits. The Museum of the Confederacy (MOC) is trapped in the traffic and development surrounding Virginia Commonwealth University Medical Center, and the American Civil War Center (ACWC) sits on a spacious spot downtown on the north bank of the James River. Likewise, the 114-year-old MOC’s relic-rich collection can enhance the 8-year-old ACWC’s dynamic, interactive exhibitions. Both expect to realize financial efficiencies by combining operations.

But nowhere is Civil War history more painfully personal than in Richmond, the former capital of the Confederacy. How did these organizations transcend touchy topics — identity, mission, historical interpretation — to allow a combined vision to prevail?

“Even if your numbers are up, it’s difficult to sustain revenue streams with visitations,” Bryan says. “I think they realized that only by coming together and working out a joint arrangement could they sustain themselves in the long run.”

Museums need a source of annual income from endowments or a state appropriation. These museums collectively come into the project with only a little more than $3 million in endowment. 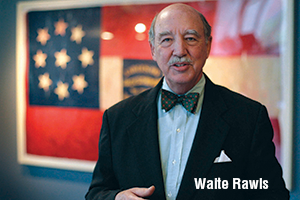 Key donors have put up $14 million for the combined museum, according to Waite Rawls, president of the MOC.  One man was particularly invested, in all senses of the word.

“I guess I’ve brought it up every year for about 40 years,” says Bruce C. Gottwald, Richmond philanthropist and business icon, with a laugh. He’s only half-joking. Gottwald is a principal donor and visionary for the project. For decades, say those close to the merger, he’s advocated a museum at the 8.3-acre Tredegar Iron Works site. Tredegar was the Confederacy’s primary source of artillery and iron during the Civil War.

“The Tredegar Iron Works was always an interesting place to me — my company [Albemarle Paper Co., later Ethyl Corp., now a part of NewMarket Corp.] was built along the river,” Gottwald says. NewMarket provided the site for the ACWC.

Gottwald recalls seeing Tredegar workers producing cannon shells in World War II. Years later, while investigating Tredegar’s office building for use as a laboratory for Albemarle Paper, he found a buried vault of “trash”: drawings of the steel plate destined for the ironclad CSS Virginia (formerly the USS Merrimack) that famously clashed with the USS Monitor in Hampton Roads during the Civil War.

Without his generosity and leadership, people close to the museum merger say it wouldn’t have happened. Another key donor, William H. Goodwin Jr., says he and his wife, Alice, supported the project not only to boost Richmond but also because it’s meant so much to Gottwald.  Gottwald won’t discuss his financial contribution and minimizes his role.

“It’s no brilliance on my part. The Museum of the Confederacy was in a spot with everything growing up around it, and it was difficult to get to; both museums were or had been struggling; they never had really been very financially successful. We had plenty of property at Tredegar and the opportunity to put the two together, and make something really substantial. It was just getting the two sides to agree.”

Getting to yes
The last round of recurring merger conversations started about 20 months ago. ACWC already had raised $8 million for its own, much smaller, expansion. “There was considerable skepticism because at that point the [ACWC] had closed out its [fundraising] campaign successfully. We had a building design; we were ready to roll,” says Christy Coleman, ACWC’s president since 2008.

When the merger became a possibility, ACWC went back to its donors. Pledges came from a wide community base of foundations and companies, including MeadWestvaco, Dominion and Altria, says Richmond lawyer and board chair Donald E. King.

A work group including representatives from both boards asked Coleman and MOC president Waite Rawls to “go off and dream,” Coleman says. “We just would get together, exchange emails and talk through stuff, sometimes we’d go get a beer and really try to stay focused about what is it we love about what we do.”

Rawls and Coleman have complementary skills. Coleman’s an expert at engaging the public with innovative programming. Rawls, a Civil War buff since childhood, grasps the power of artifacts and draws on years of expertise in the financial industry.

Negotiations took months. There was distrust on both sides, Bryan says. “The perception was that Tredegar [the ACWC] was a Yankee museum and the MOC was a Rebel museum.”

Dealing with fears
The ACWC fretted that its mission — to cover the war from Union, Confederate and African-American perspectives, each weighted equally — could be compromised. The MOC worried that Confederate heritage could succumb to “political correctness.”

“It was very important to work through how we would make sure that would not happen,” King says. “For example, we have these fabulous artifacts, including the field pen of Robert E. Lee. We’re going to do a magnificent job of presenting that thing, better than they can do in their cramped facility right now.”

A public relations firm explored perceptions about the two museums’ consolidation through online, telephone and in-person focus groups, to find out potential misgivings, arguments or points of contention in order to address them.
People from Confederate heritage groups were consulted. They feared “ancestor bashing,” Coleman notes. “It was a request for, ‘Don’t beat up on all our people and make the people on the other side seem like angels because we know they weren’t.’”

Still, B. Frank Earnest, Northern Virginia Chapter commander of Sons of Confederate Veterans, laments losing the MOC’s identity. “The people who donated [artifacts] gave to a Confederate memorial; it was never a generic Civil War museum.”

The courtship was rocky. Even so, both boards ultimately approved. Though the MOC’s vote was not unanimous, “the reality was that we had a good opportunity to create an exciting new museum for Richmond, for visitors, nationally and internationally, good financial backing, and the confidence that our history would not go away,” says Richmond businessman Matthew G. Thompson Jr., the MOC board chair,

The marriage now seems stable. Perhaps the divide wasn’t really so deep. The MOC long ago moved past the “Lost Cause” sentiment once prevalent throughout the South, which tended to minimize slavery as the war’s cause.  “We are not a ‘Lost Cause’ institution,” Thompson says, pointing out that the museum in 1991 mounted an ambitious slavery exhibit, “Before Freedom Came.”

“We’ve been leaders in that area but didn’t get the credit for it, because people focused on the [museum’s] name,” he notes, “It was harder to raise money, at least we were told, because of the criticisms people might receive for donating to an institution with our name because of what it implied.”

Historical interpretations change over time. “The Confederacy doesn’t look as good as it used to even to a lot of Southerners,” Bryan says. “To some extent, their problems were not only location, but perception, and that turned into a big problem.”

Rawls notes that today’s interest in the Civil War has gotten past the “ancestor-worship” stage. More people visit the MOC from Great Britain than Alabama, Mississippi and Georgia combined. “In one respect,” he says, “the merger is just one more step in the museum’s 100-plus years of figuring out how better to do things.”

The MOC now has a younger, more diverse board, according to Richmond lawyer Rosewell Page III, former board chair of the MOC. He also serves on the new museum’s board. Boards require fresh blood, Bryan says. New people bring new skills to the table; they ask different questions. This merger might not have happened without that board’s transition.

The merger safeguards Civil War history by ensuring the museums’ survival, say Coleman and Rawls and others, so that deeper and broader stories can emerge, such as the war’s effects on the global economy, or the role of Native Americans and immigrants. And artifacts that may never have seen the light of day can now be displayed.

The persistence of leaders willing to take a risk united the museums, and the money didn’t hurt either; without each other, both museums faced uncertain futures.

But it wasn’t just the millions. “The philanthropy alone couldn’t have fixed things,” says the new museum’s board chair, Ed Ayers, a Civil War historian and president of the University of Richmond. “The vision, the original vision [to merge] was a great one. If that hadn’t had a chance to grow, it would’ve been hard to imagine this one being a success.”

Museum merger at a glance

LEADERSHIP
Christy Coleman of the ACWC and Waite Rawls of the MOC will co-lead the new museum.

LOCATION
The new museum will be located at the Historic Tredegar site once $35 million in site improvements and new construction are completed in 2016.

OTHER PARTNERSHIPS
A partnership with the Virginia Historical Society will ensure preservation and digitization of documents.