Home News A moment on the world stage

A moment on the world stage

That is the message on the website of Richmond 2015 as it counts down the days, hours and seconds to Sept. 19.

That is the day the Road World Cycling Championships begin in the capital city. Preparation for the nine-day event (Sept. 19-27) has prompted activities ranging from widespread street repaving to the training of a small army of volunteers to guide visitors around Richmond.

The “Worlds,” as the championships are called, represent a pinnacle event for cycling. Richmond aggressively sought the races — it will be the first U.S. host of the event since 1986. The competition is supervised by the Union Cycliste Internationale (UCI), the world governing body for cycling.

Nearly half a million spectators are expected to watch the event in person, along with a worldwide TV audience estimated to number in the hundreds of millions.
Their eyes will be trained on 1,000 superbly chiseled athletes with lightning in their legs as they zip along city streets and other roads throughout the region in a series of 12 races. 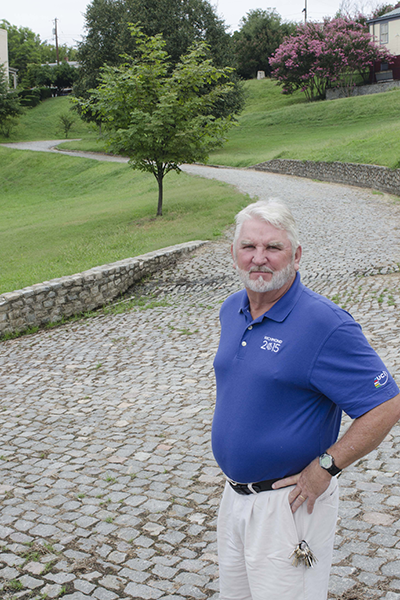 Predicted impact
Richmond 2015, the umbrella organization pulling together the various pieces of the race event, has projected a rosy economic impact: $129 million in visitor spending in the region, along with $3.8 million in local tax revenue.

The rush is on to tie the bow on race-related projects before the crowds start arriving. A safe ride for the contestants is critical.  City paving projects were expected to be completed by mid-August.

Once the races are complete, local residents will have not only better streets but legacy reminders, such as the restoration of cobblestone streets in various parts of the city, says Allen Rothert, Richmond’s special events coordinator.

“They are artists,” Rothert said of the workers who have preserved the old skills of laying cobblestones. He adds that Richmond has been collecting cobblestones over decades of street work and putting them aside in a warehouse for times when they are needed for restoration projects.

Rothert says the World Championships will be the biggest event the city has ever staged.

If plans unfold in the way they’re supposed to, Richmond will be one of the few cities in the country to have successfully hosted an international competition of this scale. “For me, it’s all about reputation,” says Rothert, who has been employed by the city for 45 years. “This will be our crowning achievement.”

Mixed emotions
Businesses along the path of the various races have mixed emotions about what to expect, according to Greg Johnson, owner of Citizen Restaurant in downtown Richmond and a spokesman for the group. “Some are looking forward to it,” he says. “Some are closing for the week.”

The ones who are temporarily closing, he says, are those who either think their products don’t lend themselves to an international sports crowd or they are concerned that their employees might not be able to get to work because of the crowds and street closures.

Johnson, on the other hand, believes that restaurant owners like him stand to benefit. “I hope we’ll be so incredibly busy, we’ll be able to take the next week off,” he says.

Johnson says some downtown businesses have expressed doubt whether adequate transportation plans would be in place, not only to deliver employees to the workplace but also to provide needed services.

But Johnson credits officials at Richmond 2015 with trying to work with downtown merchants to explain the full scope of the races and what to expect as events began. “They told us what 450,000 people really means,” he says, and it means crowds.

Ed Jones, owner of Cycles Ed in Ashland, says many small bike shop owners like him will not benefit from the races, as they initially hoped they would.  “Most of the local shops will not be involved. The teams will be bringing their own mechanics and their own equipment,” Jones says.

But he believes that the attention brought to cycling by the World Championships will add momentum to a cycling resurgence that is already underway. “We’ll be affected residually,” Jones says.
Officials organizing the races say that at every turn, they’re trying to involve local businesses and merchants as partners, and they have tried to be sure that small, women-owned and minority businesses have an opportunity to participate.

Army of volunteers
Katherine O’Donnell, vice president of community relations for Richmond Region Tourism, says the organization has revved up its “I Am Tourism Ambassador Training” program.

“We are overseeing the Ambassador volunteers that are a part of the 3,000-plus volunteer shifts being organized by Richmond 2015,” O’Donnell says. “These will be volunteers stationed at visitor info desks as well as roamers in high-traffic areas such as the FanFest in the Greater Richmond Convention Center.”

FanFest, only a few steps from the start and finish lines for races at Fifth and East Broad streets, will be the hub for fans to gather autographs and photos of their favorite riders.

More than vendors and exhibitors also will be there. Richmond-based CarMax, the largest used-car retailer in the country, is sponsoring a “Kid Zone” for young cycling fans.

Richmond also has a who’s who of corporate and regional partners to help shoulder some of the fundraising responsibilities. Among the corporate sponsors are Genworth, WestRock (formerly MeadWestvaco), Altria Group, Hunton & Williams and Dominion Resources.

Richmond 2015 officials set a goal of raising $21 million to put on the races. “We’re very much on track,” says Lee Kallman, vice president of marketing and business development.

In addition, Virginia Tourism Corp. (VTC) is planning to air at least 500 commercials across the country during the championships.

The 30-second commercials will be aired on Universal Sports, NBC Sports Network, CNBC, and NBC. The spots will feature Virginia travel experiences, such as outdoor recreation, beaches, mountains and culinary scenes before a large audience tuning in to see the bike race.

The commercials are part of a $2 million partnership between the VTC and Richmond 2015.

Fees from television broadcasts of the races, royalties from the official travel program, as well as concession and merchandise sales also will help bolster the bottom line.

Kallman says that in Europe the World Championships are regarded almost strictly as a big race. “For us it’s more of an international festival, an international party,” he says. “It provides a stage to showcase the region to the world.”

International interest
The Richmond area is getting that international exposure at a time when an increasing number of foreign companies are showing an interest in the region.

“About 74 percent of the projects we’re working on are international,” says Barry Matherly, the CEO of the Greater Richmond Partnership, a regional economic development marketing group. “Over the past three years, it’s been climbing steadily.”

Last year, for example, Tranlin Inc., a subsidiary of a Chinese pulp and paper company, announced it would spend $2 billion during the next five years to build its first advanced manufacturing facility in the U.S., which will be located on an 850-acre site in Chesterfield County.

Perhaps one of the reasons for increased international attention in the region was a change in the partnership’s strategy two years ago.

Matherly says the organization closed its international offices and focused on a rapid-response effort to send representatives to emerging markets or to any country where prospect activity was hot. “It made us much more flexible,” Matherly says. “We ramped up internationally.”

Downtown population rising
The cycling event will spotlight Richmond at a pivotal time in its history. Downtown apartment development in the city continues at a blistering pace, as millennials, empty nesters and others flow into the city.

The advocacy group Venture Richmond reports that about 20,000 people now live in downtown Richmond, nearly double the 10,244 residents counted in 2010. That means that the number of downtown residents is nearly equivalent to the population of Waynesboro.

Among recent examples of the trend have been conversions of the 23-story former Central Fidelity Bank headquarters on East Broad Street (an ongoing project) and the 14-story (with a seven-story annex) former Virginia Power headquarters at Seventh and East Franklin streets.

Scott’s Addition blossoms
The newest hotspot in Richmond’s housing scene is Scott’s Addition, a former gritty industrial area that has been the focus of intense development activity during the past few years.

The Scott’s Addition Boulevard Association has reported that 1,200 apartments either have opened in the past year or are expected to open this year.

The neighborhood is bounded on the south by Broad Street, on the east by The Boulevard, on the north by the railroad tracks and on the west by Interstate 195.

It was declared a historic district in 2005, making it eligible for historic tax credits and real estate abatements from the city.

Louis Salomonsky, a 76-year-old developer who has been building housing in Richmond for half a century, says Scott’s Addition is on fire. “We built 134 apartments, and they rented overnight,” says Salomonsky, a principal in Historic Housing.

He added that the median income of those who are renting from his company has gone up significantly during the past few years.

“There is increasing affluence,” Salomonsky says, but he adds that increased development in the area has gone hand-in-hand with increased gentrification, as households with lower incomes have moved out.

‘Reversal of fortune’
Gentrification in Richmond’s historic areas and other forces, such as increased immigration from Mexico and Central America, has produced what urban planner John Moeser calls “a reversal of fortunes” in the Richmond region.

Pockets of poverty have shifted from the city into suburban counties, as low-income residents seek less expensive housing.

Moeser, who taught urban planning at Virginia Commonwealth University, now is a senior fellow at Bonner Center for Community Engagement at the University of Richmond. He says that for the first time in American history the majority of poor now live in the suburbs, and the Richmond region is no exception.

In a recent report, Moeser notes that, from 2000 to 2012, the number of people living below the poverty line rose 70 percent in Henrico County and increased 41 percent in Chesterfield County, Richmond’s two biggest suburban neighbors.  By contrast, Richmond’s increase was 25 percent.

“The reversal of fortune between the city and county is becoming the new normal,” Moeser recently wrote.

In an interview, he observes that gentrification in various sections of Richmond undergoing rapid development will continue.

“I don’t see that stopping anytime soon,” he says. “My prediction is that the counties are going to have a much more serious time with poverty as time goes on, concentrated, high density poverty.”