Home News Regions Central Virginia A lull in the action

A lull in the action

2015 was relatively quiet after a year of blockbuster deals

Blockbuster announcements are what economic development officials dream about.

Then, there are the quiet years in which there are no big deals to announce. Last year was a relatively quiet year for much of Central Virginia.

In fact, one of the biggest recent economic development stories in the region concerns a deal from 2014 that went bad.

The Roanoke Times reported in January that the state failed to spot red flags in giving $1.4 million in incentives to Lindenburg Industry, a Chinese group that planned to open a manufacturing operation in an old furniture factory in Appomattox County.  The revived factory was supposed to create nearly 350 jobs, but it never hired the first worker.

The incident prompted calls for a thorough review of how the commonwealth handles incentives.

Richmond area
After a year of blockbuster announcements in 2014, last year was relatively quiet for the Greater Richmond Partnership, which markets Richmond and Henrico, Hanover and Chesterfield counties to business prospects.

“I think it was a year of living up to the announcements of 2014,” says Barry Matherly, the organization’s president and CEO.

In October, Tranlin Inc., the U.S. subsidiary of a Chinese pulp and paper company, broke ground on a $2 billion paper plant in Chesterfield County that had been announced in 2014. The project is expected to create 2,000 jobs by 2020.

Last year also saw California-based Stone Brewing Co. unload 20 huge tanks to be used for the brewery it is building in Richmond. In 2014, the company announced a $74 million project, which will include a restaurant and a retail store as well as the brewery. Stone expects to eventually employ 288 people.

While it didn’t attract a lot of new employers last year, the area has benefited from the expansion of existing companies. In June, Elephant Insurance, which established a headquarters in Henrico County in 2009, announced that it would hire 1,173 employees in coming years. Before the announcement, Elephant had about 400 local employees.

Also expanding is Minacs, a business outsourcing company in Henrico. In August, it announced the addition of 400 jobs at its call center.

Greg Wingfield, Matherly’s predecessor, recalls that in 1994, when the partnership was founded, the region was experiencing dark days.

“Richmond was at the bottom of Money magazine’s ‘Best Places to Live,’” Wingfield says. “There were 161 homicides that year.”

But, gradually, Wingfield says the region got its confidence back. During the next two decades, Wingfield says, he worked with 450 companies that poured $11 billion in capital investment into the region, creating 60,000 jobs.

“Today, Richmond is regarded as a good place to do business,” Wingfield says. 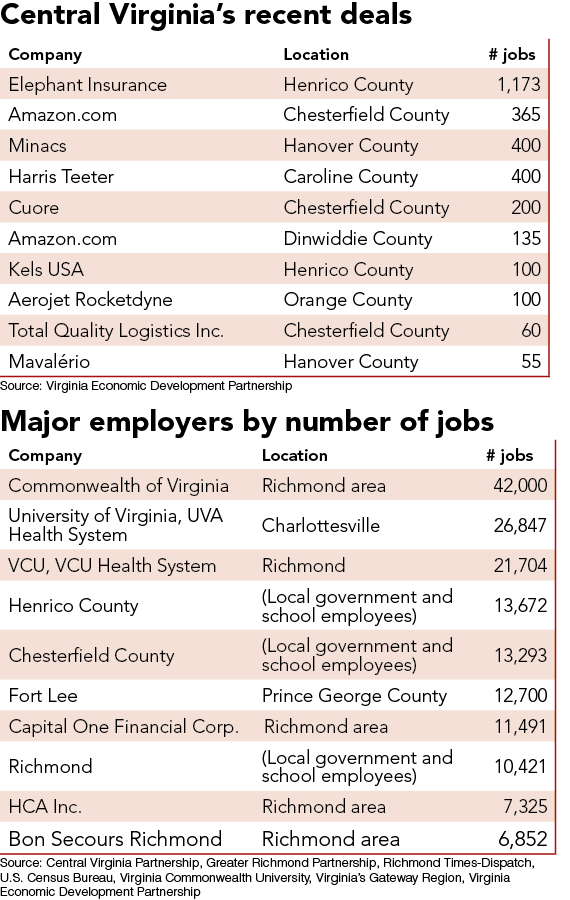 Gateway Region
In the Gateway Region, which includes five counties and three cities south of Richmond, one of the largest capital investments last year came from Ashland Inc., a specialty chemicals company. It announced it would invest $89 million during the next three years to expand its Hopewell manufacturing operation.

The expansion will add about 17 jobs but also will preserve 237 existing jobs, according to the governor’s office.

Renee Chapline, president & CEO of Virginia’s Gateway Region — which includes the cities of Petersburg, Hopewell and Colonial Heights and the counties of Chesterfield, Dinwiddie, Prince George, Surry and Sussex — says a lot of businesses looked at the region in 2015, but they have been slow to commit.

Amazon, an electronic commerce company, has been hiring employees at two fulfillment centers in the region where the company stocks and ships its products.

In May, the company announced that it would hire 135 more employees in Dinwiddie County and 365 in Chesterfield County. The company said in January 2015 that it had the equivalent of 3,300 full-time employees in its regional operations.

One of the most surprising developments in the region has been the rise of Petersburg as a Hollywood hotspot.

Steven Spielberg filmed a number of scenes for his 2012 movie “Lincoln” in the city. Since then Disney and other filmmakers, including actress and producer Meg Ryan, have filmed there.

“Mercy Street,” a Civil War-era PBS miniseries was filmed in Petersburg and Richmond. It premiered in January.

Last year, Aerojet Rocketdyne in Orange County announced an $11 million expansion of its manufacturing plant, creating 100 jobs. The company operates a test facility for rocket motors and propulsion systems, as well as a technology development center.

Lynchburg area
The Lynchburg region still was struggling last year to recover from the devastating recession that struck the country in 2008-2009, according to a recent assessment at the region’s annual economic summit in December.

Business professors from Old Dominion University told the audience that the region was down about 6,500 jobs from prerecession levels.

On the bright side, Megan Lucas says that wage growth has increased in the region and the leisure and hospitality industries are on the upswing.

Higher education plays a large role in the region’s economy with four, four-year colleges, including Liberty University, one of the fastest-growing colleges in the country.
Lynchburg lost one of its largest employers when Nationwide Insurance announced in February 2015 that it was closing its Lynchburg facility, a move that affected 340 employees.

Lindenburg lesson
The failed Lindenburg deal in Appomattox County represents a cautionary tale for any entity involved in economic development.

The Roanoke Times found that state analysts working on the deal relied on a company website that provided misleading information. For example, it listed a North Carolina address where the company never was located and featured production photographs and text lifted from an unaffiliated American company.

In fact, North Carolina officials walked away from a possible deal with the same Chinese group in 2013 after discovering the erroneous address and raising questions that went unanswered.

Virginia declared the Appomattox project dead in December and has demanded repayment of the incentive money. The Chinese company left unpaid bills of more than $450,000 from contractors.

Maurice Jones, Virginia’s secretary of commerce and trade, told the Senate Finance Committee in January that reforms are being implemented to avoid the mistakes made in the Lindenburg deal. The state also is investigating whether fraud was committed in that deal.

Construction starts on retail building at The Shoppes at Reynolds Crossing