“This is the element I love the most about that story: We didn’t even know they were looking at us until we were on the short list,” Gaskin says about the deal.

Most localities would like to see their names on that list. The Vitamin Shoppe plans to hire 174 workers and invest almost $40 million by 2015 in its facility, which opened last year at Ashland’s Virginia Transportation Park. The New Jersey-based retailer, which sells products like vitamins, minerals and herbs, has more than 600 stores around the world. As of the third quarter of 2013 (the latest available figures), the company employed about 50 workers at the Ashland facility, with plans to continue hiring during the next two years. 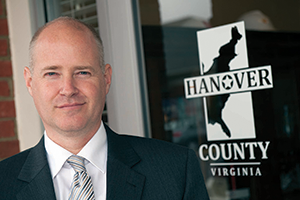 Gaskin says The Vitamin Shoppe had used data models to narrow its site selection process to a handful of the sites on the East Coast by the time company contacted Hanover officials. “It felt good to walk into a room knowing they wanted to be here because their business model dictated that this was the general area where they wanted to be,” he says.

So, what made Ashland so appealing? The site made sense logistically since it’s off Interstate 95, and The Vitamin Shoppe moves most of its freight by truck, says Rich Tannenbaum, the company’s senior vice president of supply chain. The company also found a good workforce and access to parcel carriers for Internet orders.

“We’ve had ample labor available to us, and we’ve been super impressed with the skillset and the experience and the work ethic that we found with the health enthusiasts that we hired at this facility,” Tannenbaum says.  (The Vitamin Shoppe calls its employees health enthusiasts.)

Gaskins thinks one of the factors for The Vitamin Shoppe’s decision was Ashland’s quality of life. “I know for a fact that when they came to visit they really liked the feel of the town,” Gaskin says. “So, you know, they are very employee focused, and I think the quality of life, the quality of place, really played a factor in the final decision making.  You know, that never trumps the economics, of course, but it is a soft factor that I think does influence that final decision.”

The Vitamin Shoppe had been looking at the mid-Atlantic region and eventually narrowed its search to North Carolina and Virginia. The company focused “generally around Richmond,” Tannenbaum says, before settling on Hanover County. Construction on the facility began in September 2012 and was completed last June.

Tannenbaum notes how smoothly the construction project went.  “I would say completing such a large capital infrastructure project like building a facility of this magnitude [is] certainly a complicated endeavor, and … the timeline moved along nicely, and I think that’s a real testament and tribute to the working relationships that we developed with both the local and county officials,” he says.

Tannenbaum describes The Vitamin Shoppe’s distribution center as the company’s most automated, pointing to investments in conveyor and material handling systems (the company has three other distribution centers in the U.S. besides Ashland).  “This technology allows us to move the goods quickly and efficiently through the distribution center. It allows us to do it with a high degree of accuracy so that we make sure we’re shipping exactly the right item that our customers need and we are able to do it in an efficient manner,” he says.

The facility has an employee fitness center that includes treadmills, stationary bikes and weightlifting equipment. Other amenities include a cafeteria, lounge areas and an outdoor seating area.

“We think that the culture inside our [distribution center] for our health enthusiasts is really important,” Tannenbaum says. “You know we all spend a lot of time at work, sometimes more than we do at home with our loved ones, so we try to make it a really pleasant experience when folks are with us throughout the day.”

At the end of 2013, The Vitamin Shoppe’s Ashland facility planned to supply more than 120 stores in Texas, Oklahoma, Louisiana, New Mexico and Florida. The distribution center intends to serve more stores this year and start shipping Internet orders.

Can baseball boost the Bottom?

While developers seek opportunities around a proposed stadium, others question its impact