How would underserved regions adapt to Medicaid expansion?

During Virginia’s long debate on expanding Medicaid, the siren song for supporters has been “access to health care.” Pass the bill, they said, and thousands of uninsured finally will get to see doctors and nurses.

If only it was that easy. Getting a Medicaid card doesn’t necessarily mean you have a doctor at hand. Plenty of places in Virginia — especially rural areas — already are short of health-care providers. Oftentimes, people there depend on nonprofit community health centers or free clinics (both of which are chronically underfunded) scattered around the state, or they just go without. This is the true access challenge.

And, even with new money to help recruit providers, the whole health-care network, public and private, has to figure out how many new enrollees they’ll need to care for. So, it would take some time to see the full effect.

Deborah Oswalt, executive director of the Virginia Health Care Foundation, says the health-care sector will rise to the challenge of treating the newly insured. “I’ll tell you why. Because every one of [the new Medicaid enrollees] will go into managed care.

They’ll become patients of managed-care organizations. And those organizations will have contracts with DMAS [Virginia’s Department of Medical Assistance Services] that require them to ensure” they have enough providers.

The foundation would work to enroll newly eligible Medicaid recipients. “The thing that we’ve learned over 20 years is that it is a slower process than one imagines. It’s not as if a switch is going to flip, and all of the sudden these 300,000 people are going to be enrolled. It will take years.”

Doug Gray, executive director of the Virginia Association of Health Plans, agrees. “Of course, they won’t all enroll right away,” he says. “It’s more than an ‘if you build it, they will come’ situation. In some places, the capacity exists; in other places, it does not. Providers will hire more people, and the qualified centers may increase their capacity. We have the flexibility to change, but just like any change in a program, you’re going to have to see where the demand is. That takes a little bit of time.”

The new population of patients created under expanded Medicaid still would have to identify itself. There is, for example, the “woodwork effect,” a phrase generally used to describe a rise in enrollment when a program is changed or expanded. It means people who already were eligible hear about the change and come forward to enroll, resulting in more new applicants than just those newly eligible.

‘More boots on the ground’
Places like Southwest Virginia and Southern Virginia have some of the highest numbers of uninsured. In fact, an annual free clinic conducted for the past 18 years at the Wise County Fairgrounds by Tennessee-based Remote Area Medical has drawn national attention.

Last year, the three-day event, which is staffed by health-care volunteers, provided medical, dental and vision care to more than 2,000 people from Virginia and other states. The clinic returns to Wise County on July 20. 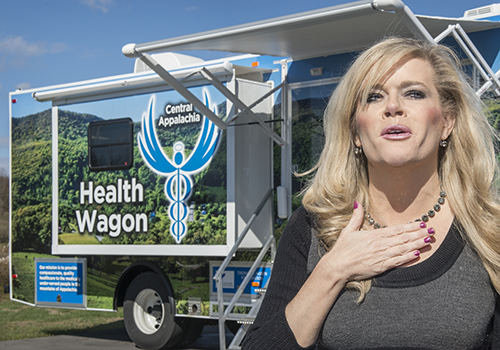 Teresa Gardner Tyson has firsthand knowledge of the needs of the uninsured. She is executive director of The Health Wagon, a nonprofit group that provides health-care services in Southwest Virginia. Because of the large number of uninsured people in the region, she says, “Medicaid expansion would be favorable for the people I treat.” The region, however, needs more doctors and mental-health professionals. “So, anything we can do to put more boots on the ground here in Southwest Virginia is favorable.”

Health Wagon is a free clinic. With expansion, it could become an official Medicaid provider, which would be ironic. “Because, right now, we do have Medicaid patients. We’re not getting any reimbursements; sometimes they can’t get in with a provider” and have to turn to the free clinic.

About five years ago, Health Wagon hired a consultant to run the numbers on how best to take advantage of Medicaid dollars if they started flowing. “We’d have to go back and look at those numbers again” and see whether becoming a Medicaid provider makes sense, Tyson says. “We’re sustained by donations and grants, and at the end of the day, though, we do give free care, [but] the care that we give is not free.”

Tyson’s organization is trying with some success to lure health-care professionals by promoting a “medical tourism” concept. “We do live in a very beautiful region, and people on the other end of the state come here, and they love it,” she says. A physician recently came to Health Wagon for a two-week stint, and a week earlier a cardiologist and radiologist visited. “We try to leverage every resource,” Tyson says.

The Virginia Community Healthcare Association (VCHA), which has 29 member organizations at 147 sites, serves about 100,000 uninsured people every year. Neal Graham, its CEO, estimates that of that number, about 70,000 would be eligible for Medicaid under expansion. “So, that’s 70,000 people who are currently in our health-care system who would be eligible.” VCHA already is the largest Medicaid provider in the state, Graham says, and after expansion it could wind up enrolling an additional 100,000 new Medicaid patients.

Estimates of how many people statewide would be newly eligible vary, to say the least. “Everybody’s got a different number,” Graham says. There were estimates of 400,000 eligible people; then the estimate dropped to 300,000, based on an expectation that not all eligible people would enroll. “But about 100,000 are expected to come to community health centers, so, as you can imagine, that’s a large impact.

“Each health center would look in their area to see how many people are eligible,” Graham says. And if the expansion follows the existing model that uses managed-care plans provided by private-sector insurers then “we’re all in those networks now. We would work with those insurers to make sure those people are in proximity to health centers.” That would be a first step, determining where these people would go. “With that in mind, you would look at allocating the number of providers and the types of providers.”

The group has been anticipating these changes to the VCHA network. “We’ve been looking at this for five years now. We’ve got the models in place, and we’ve got a fairly good idea of where these people live and what centers they would go to. If it does happen, we can be operational in whatever time they require,” Graham says.

Making it work financially is “all about volume.” More patients would result in more revenue and distribution of costs. “You have to have a payer mix that will help cover some of the cost of nonpaying patients,” Graham says. “You just have to adjust your business model accordingly. So, that’s a capacity need that we’re struggling with, that other providers don’t have to worry about.”

Oral-health problems
A problem that could well exist, even with Medicaid expansion, is the lack of oral health care. People need dentists. “Right now, oral health is very limited in the Medicaid system, and that will not change,” Graham says. (Dental benefits for adult Medicaid recipients in Virginia are limited to medically necessary oral surgery and associated diagnostic services.) But once a person is enrolled as a primary-care patient, “we’re obligated to provide [more-routine oral health care] to you, but there’s no reimbursement,” he says.

Graham says his group works with community-service boards around the state, which are a main point of contact for the state’s public mental-health system. “Anything beyond that, we simply cannot recruit the providers,” he says. “It makes a real challenge that we have to deal with on a daily basis.”

Typically, a health-care employer would lure people with higher wages. That’s not an option for the community-health centers or free clinics. As for Graham’s group, “it’s not like we’re a cash cow that can afford to pay extensive amounts of money” to help lure health-care providers. Offering housing sometimes helps, or when it comes to providing mental-health services, there are options with telemedicine. “You’ve got to be creative with these things. You’ve got to make sure some payment mechanism exists to make it possible. It does no good to then run out of money and have to close your doors.”

Safety-net grants
Organizations like the Virginia Health Care Foundation are one source. In early March the group announced $1.5 million in grants to 18 “health safety-net organizations,” the largest being a $235,000 grant to expand dental services at the new Family Dental & Specialty Center of the VCU Health Community Memorial Hospital in South Hill. The center is expected to open in mid-2018 serving patients in South Hill and Mecklenburg County.

The money doesn’t go just to rural areas; the second-largest grant was $220,000 to the Arlington Free Clinic. That funding is also for dental services for the county’s low-income and uninsured residents.

Finding money is an unending task. “You’re constantly looking for new resources. It cannot be just reimbursements to a provider,” Graham says. “Every day, the health-center executives and their boards wake up knowing this is the challenge, to provide quality, competent care to a population that can’t afford it. That’s why we exist.” 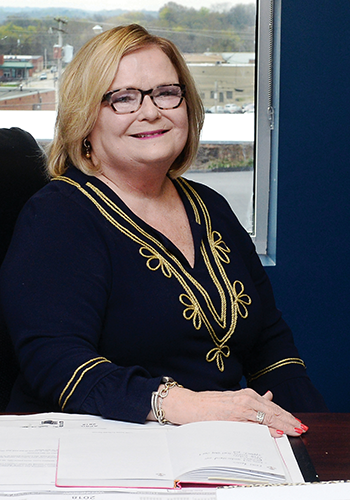 Kay Crane is CEO of Piedmont Access to Health Services, known as PATHS, which has five health centers in Southern Virginia. She says Medicaid expansion would have a good effect on federally qualified health centers (FQHCs), which would receive “enhanced reimbursements” — more money — because of their status. That means they could hire more providers, Crane says.

Crane says about 3,500 of her current patients would qualify for Medicaid under expansion. “That’s a big deal for us. Right now, about 22 percent of our patients are Medicaid eligible; children and adults with disabilities.” The group has hired two new providers recently, but that wasn’t done in anticipation of an expanded Medicaid program. “We just knew there was a need in our area.” In most communities, there is about one health-care provider for every 1,200 to 1,500 patients. “In our area, it’s like one provider for every 6,000 patients,” Crane says. “That’s what it means to be medically underserved.”

Legislation passed by the General Assembly this year could help the situation. The law reduces requirements on licensed nurse practitioners (LPNs) regarding what level of oversight they need to have from physicians. The change likely means more LPNs can be hired to work in underserved areas.

A learning curve
There’s likely to be a learning curve under expanded Medicaid. Oswalt notes that, if there is a work requirement included in Medicaid expansion, “that’s a whole other layer of bureaucracy that we have to teach everybody and learn ourselves.”

Some confusion among the eligible state residents is likely, too, Oswalt says. “One of the things we saw when the ACA passed is that everybody automatically thought that everybody was insured. I’m afraid the same thing will happen here.” It’s bound to affect the process. “I think it would be wonderful in the first year if we could hit 100,000 people enrolled,” she says. “I’m going to be really happy if we do have Medicaid expansion, but we’ll still need a safety net.”

Much of the health-care debate since the 2010 passage of the Affordable Care Act has been about money and politics, that the federal government is getting too big, and that the law is costing too much. Both are legitimate topics, but on the front lines, people see the health-care issue differently. “Your life is shortened by living here in the mountains,” says Tyson. “Your longevity should not be dictated by your ZIP code.”