The recent economic buzz in Southern Virginia is being generated by an uptick in advanced manufacturing, the creation of megasite parks and a flurry of new local businesses.

“This is a happening place,” says Linwood Wright, a consultant to Danville’s office of economic development.

This year Danville saw several of last year’s major economic announcements move forward. Range Rover manufacturer Overfinch invested $8 million to establish a manufacturing operation in the 330-acre Cyber Park. The new facility, which is expected to employ 41 workers, already is beginning to add the final touches to vehicles that will be sold to customers throughout the United States.

The city also saw the development of the Kyocera SGS Tech Hub, a subsidiary of Ohio-based Kyocera SGS Precision Tools. The company is investing $9.5 million to establish its technology and strategic manufacturing hub in Danville, which is expected to create 35 jobs. Its 30,000-square-foot facility in Cyber Park is under construction and planned for completion next May.

United Kingdom-based Unison Ltd, a global tube-bending machine company, plans to invest $5.2 million to establish its first U.S. manufacturing operation in the Cane Creek Centre Industrial Park, jointly owned by Danville and Pittsylvania County. The state competed against North Carolina and the United Kingdom for the project, which is expected to create 35 jobs.

The area’s emphasis on technical training is a draw for international companies, especially firms from the United Kingdom. Danville has had several visits from other British companies involved in advanced manufacturing.

“We are trying to bring manufacturing back,” Wright says. “That is the strategic reason we wanted to have a workforce that managed and was comfortable with 24-hour-a-day, seven-day-a-week operations.”

The 3,500-acre Berry Hill industrial park in Pittsylvania, which broke ground this March, is being graded, and prospects are being lined up. “We have a sizeable, large advanced-manufacturing business coming in, but it has not been announced,” Wright says. “We have an option on a site by the Southern Co. for a gas-fired electric generation facility.”

The city’s River District, formerly known as the downtown and warehouse district, also is attracting businesses. “There is a lot going on there,” Wright says. “Twenty-seven million dollars of public funds generated about $130 million of private investment. We have several hundred market-rate apartments leased before they are finished with 95-plus percent occupancy rates. Three to four new restaurants, craft breweries and a boutique distillery have been announced.”

Mega-site training center
Martinsville-Henry County is also focusing on workforce training. This year it broke ground on the Commonwealth Centre for Advanced Training at the Commonwealth Crossing Business Centre, a mega-site industrial park in southern Henry County. The facility will include a high bay area where a company moving to the park can bring in its own equipment for training. Once training is completed, the company would remove the equipment to make way for the next business. 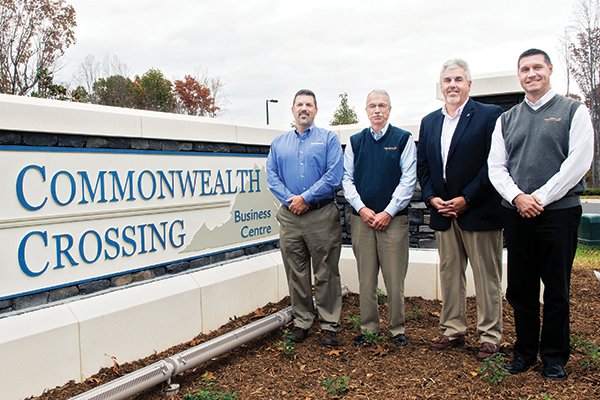 “We typically compete with states such as Tennessee, Georgia and North and South Carolina,” says Mark Heath, president and CEO of the Martinsville-Henry County Economic Development Corp. “We haven’t run up against anything like this training facility in those states. This will provide seamless training and pre-employment screening testing to allow people to move from the training facility to the manufacturing facility.”

In June Martinsville-Henry County received one of eight state Business Ready Sites Program development grants for Commonwealth Crossing. The $500,000 grant will help with the cost of an onsite water tank.

Designed as a job and tax-base generator, the industrial park already has caught the attention of domestic and international companies, officials say. The park was built for projects involving investment of $250 million or more, creating 400 or more jobs.

“The center is designed so it can be expanded,” Heath says. “It should be completed by May 2019.”

Martinsville-Henry County has landed five economic development deals this year as well as being the site of several local company expansions. The projects represent $20.7 million in total new investment with the promise of 127 new jobs.

Area expansions included Bassett Furniture and Eastman Chemical Co. Bassett is investing $1.5 million in equipment and plans to add 22 employees during the next few years. Eastman Chemical, a global advanced materials and specialty additives company, is investing $11.7 million to expand its manufacturing operation.

“The last three years have been pretty consistent and steady for us, and that is what we hope to continue,” Heath says. “People are upbeat about manufacturing in general. The future of manufacturing here looks good. It’s getting stronger and improving. It’s been a while since bullish attitude about manufacturing. We are grateful it’s come our way.”

Filling empty spaces
Meanwhile, South Boston is seeing an increase in new local businesses, thanks to a $60,000 community business launch grant through Virginia Main Street, a program administered by the Virginia Department of Housing and Community Development. The program offers services and assistance to communities that want to revitalize a historic district. The town added more than $10,000 to the project. 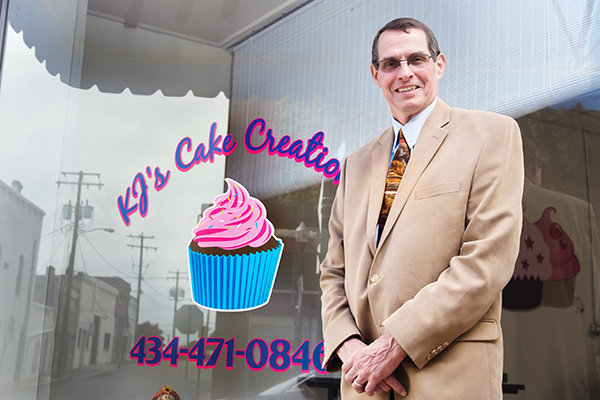 South Boston handed out six grants totaling $52,000 for one business expansion and five new businesses. One of those businesses, KJ’s Cake Creations, “took a derelict building and fixed it up,” Raab says. “She is doing really good.”

“The owner moved from Houston three years ago, and she had a small children’s store there. We did a survey on what types of business people wanted, and number one was a coffee shop. So she did both in the same store,” Raab says. “She has already expanded to the town of Halifax.”

South Boston is seeing spinoffs of the new businesses already. The husband of Joe and a Bow’s owner, for instance, is opening SoBo Burger downtown.

The town also has received an Industrial Revitalization Fund grant of $475,000 to renovate the John Randolph Hotel downtown. “It has been derelict for about 20 years,” Raab says. “In September, we received a Tobacco Commission grant for $600,000 toward the remodeling of the hotel.”
Built in 1929, the hotel will include a restaurant and 27 guest rooms as well as a rooftop bar. “We are in the process of talking to developers,” Raab says. “We estimate $8 million to redo the hotel. We can use historic tax credits.”

Imperial Lofts will be going into the former Tultex/Imperial building near downtown. The town will partner with the developer on the 135,000-square-foot project. In October, Town Council approved all the documents needed to borrow $5.6 million for the project and was waiting to sign the actual bond documents. The project will create 40 to 50 market-rate apartments as well as commercial space and storage.

“The hotel renovation and the new lofts will be a big shot in the arm,” Raab says. “We are growing. Things are looking positive. These new businesses are all younger, enthusiastic people. It’s exciting to bring new enthusiasm to the area, which we needed.”