From tea to trucks to technology, an eclectic blend of industries settled into the Roanoke/New River Valley region in 2020.

Some companies brought new operations to the region, while others expanded existing facilities.

Traditional Medicinals kicked off 2020 with its January announcement of a new facility in Franklin County, manufacturing herbal teas and supplements — its first move outside of its home base in Sebastopol, California.

Other companies — such as Apex Systems Inc., a professional staffing and IT solutions firm, and Fleetwood Homes, a manufacturer of prefabricated houses — are digging deeper roots in the region.

A subsidiary of Henrico County-based ASGN Inc., Apex is hiring 74 employees and investing $945,300 in an existing facility in Roanoke. The expansion is part of a statewide investment totaling $12.4 million, creating 121 new jobs at its headquarters in Henrico County and 147 jobs in Virginia Beach. [See related story, Page 11.]

The Apex jobs in Roanoke pay annual wages of about $103,000. “That is a big deal,” says Marc Nelson, economic development manager for the city. “It’s important to have a big, solid announcement for a city to hang its hat on.”

Fleetwood, a subsidiary of Phoenix-based Cavco Industries Inc., is adding 60 jobs and plunking $2.1 million into renovating its Rocky Mount facility. The company, which has been in Franklin County since 1968, employs 146 people.

“The Roanoke region is one of the most economically diverse economies in Virginia, so it’s not surprising that it’s a leader for a lot of businesses,” says Doughty, who retired in December after 22 years.

In all, seven companies — working through the Virginia Economic Development Partnership — announced 843 new jobs and $73.4 million in investments last year in the Roanoke/New River Valley region.

They do not represent all 2020 economic developments in the region, such as advances in medical and research fields — only ones that worked through VEDP.

The leading job creator in the group is Blacksburg-based Daimler AG subsidiary Torc Robotics, a software development company for unmanned vehicles, which will bring 350 jobs to Montgomery County. The biggest investor is Traditional Medicinals, which plans to spend $29.7 million on a new plant and operations.

The Traditional project was assisted by the Tobacco Region Revitalization Commission with a $245,000 grant and a $245,000 loan. The company is a pioneer of wellness teas and a leading seller of organic and Fair Trade Certified herbal teas in the United States and Canada.

The 56 jobs at Traditional will have wages about $10,000 higher than Franklin County’s average salary of nearly $34,000. Torc Robotics will invest $8.5 million to expand software development operations. It is building a facility at the Virginia Tech Corporate Research Center near its current operation in the Blacksburg Industrial Park.

“We’re excited to have a local homegrown company continue to grow here,” says Charlie Jewell, executive director of Onward New River Valley, a development organization that worked with the VEDP to secure the project.

Montgomery County received an $800,000 state grant to assist with the Torc project. Another $3.5 million was approved from the Virginia Economic Development Incentive Grant.

Torc was founded in Blacksburg in 2005 by a team of Virginia Tech students who formed the company after winning multiple robotic challenges. The company was purchased by Daimler Trucks in 2019. Torc is developing self-driving trucks, employing about 175 people.

“Trucking is the backbone of the U.S. economy, delivering food and products to every community,” Torc Robotics CEO Michael Fleming said in a statement.  “Commercializing self-driving trucks is a marathon — not a sprint, and requires long-term commitment from companies, investors and employees.”

Modea, another brainchild of Virginia Tech graduates, is a digital strategies firm focused on the health care industry. In June 2020, at the height of the first pandemic lockdown, the company announced a $100,000 expansion and 20 additional jobs.

“Any announcement during a global pandemic is special,” Jewell says.

The Patton Logistics Group, a transportation and freight services company, announced in January 2020 — before much of the nation was aware of the coronavirus, let alone its impact here — that it would invest $12 million and hire 23 people to build and staff a logistics and warehousing operation in Pulaski County.

“Even though it was announced prior to the pandemic, the project is still on track,” Jewell says. “The 250,000-square-foot building is going up.” The state approved a $150,000 grant to assist Pulaski with the project.

A study of 35 manufacturers and 28 tech companies — the kind of companies Onward New River Valley likes to attract — conducted in September 2020 shows that a quarter of businesses polled increased their employment numbers during the first six months of the pandemic.

“The numbers are encouraging,” Jewell says. “Overall, both industries persevered through the pandemic.”

On the tech side, most employees work remotely. Manufacturing requires a physical presence — a testament to high standards used at this time to keep employees safe, he says. “Hospitality, leisure and retail have been decimated, but other sectors have figured out a way to make it work.”

Tech and manufacturing, Jewell adds, “are the sectors that bring money into a region and keep restaurants and other industries alive. Hopefully, businesses will rebound once we get widespread distribution of a vaccine and go back to living in a non-physically distanced world.”

Other big job and money makers in the region that are not part of the VEDP reporting system are in the medical and research fields.

Roanoke-based Carilion Clinic, which operates seven hospitals as well as practice sites from the Shenandoah Valley to Galax, is building a $30 million children’s outpatient center in space once occupied by a JCPenney store in Roanoke County’s Tanglewood Mall.

The center, which will employ up to 300 people, is a short drive from Carilion Roanoke Memorial Hospital, which is undergoing a $500 million, five-year expansion.

Such expansions, which fall into reporting systems of local governments and are assisted by the localities, are a major boon to the area, Doughty says.

“The doubling of the research institute is a really big thing,” she notes. “The institute is filled with intellectual capital and property.”

Roanoke city, in addition to scoring the Apex expansion, counts other economic wins for the year, including the transformation of a former department store.

Shuttered for years, the Heironimus building was converted into 80 apartments and commercial space by Richmond-based The Monument Cos., which invested $18 million to renovate the former department store opened in 1890.

“We have been pleased, considering that we didn’t do our typical opening or big event [because of COVID] to introduce ourselves to the community,” says Sheri Moretz, a spokesperson for Mast General. “People have found us through social media or word of mouth.”

Of late, Roanoke is receiving more inquiries from state and regional partnerships about potential business developments — a sign that the economy is picking up, Nelson says. “The momentum is moving that way.” 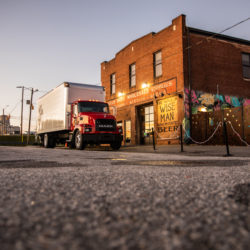