A distinct vision for students

University grows and changes but keeps its focus

The University of Mary Washington isn’t a very big school, and it doesn’t really want to be. The university has about 4,400 undergraduates, way below enrollment giants like Virginia Tech (34,950) or James Madison University (22,686).

UMW will likely never reach those totals. Its main campus in downtown Fredericksburg is just 3-by-10 blocks, not including some nearby athletic fields and university-owned apartments.

“Students walk a lot farther at Virginia Tech or U.Va. to get to anything,” says Jeffrey McClurken, a 1994 UMW graduate who has taught at his alma mater since 1999. He also serves as special adviser to UMW President Troy Paino, who arrived in 2016 after six years as president of Truman State University in Kirksville, Mo.

“Part of what we sell [to prospective students] is that compact experience,” McClurken says.

The approach seems to work. That’s not to say the school is static —  it grows, rebuilds and adjusts academic programs pretty much every year. UMW just has its own vision about the undergraduate experience, McClurken says. “I know my students,” he says. “But it’s not so small that you literally know everyone, which is also a good thing.”

Serving STEM students
The university’s biggest project underway now is expansion and renovation of the Jepson Science Center, which holds several of the university’s key STEM-related departments. The new space, which opens this fall, will be three stories tall and have nearly 42,000 square feet. Two departments — physics and earth and environmental sciences — will move there. Biology and chemistry departments will stay in the existing building but that space — 28,000 square feet — is being renovated and will be ready next spring.

This project is a big deal for the school’s goal of attracting STEM-focused students. Jodie Hayob, chair of the Department of Earth and Environmental Sciences, notes that when the original Jepson building opened in 1998 “we pretty much outgrew it on the day we moved in.” 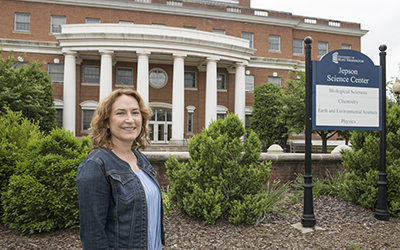 One selling point for STEM majors is that the new space will be populated by undergraduates working directly with faculty. That’s generally always been true at UMW. There are no graduate students to compete with for lab space or faculty time. But this is new equipment and more space.

“The professors do all of the teaching and all the grading. We don’t have equipment that undergrads aren’t allowed to use,” she says. “The STEM fields are important and popular and … more engaged learning leads to students being better prepared,” Hayob says. 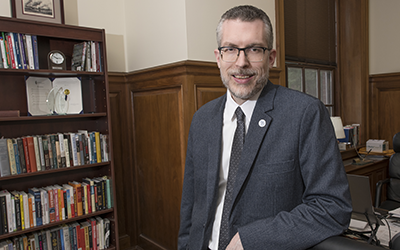 UMW is continuing its push to teach students digital communications skills no matter their field of study, says McClurken. In 2015 the school created a major, communication and digital studies. This year 172 students were pursuing that major with 44 students minoring in the field.

Plus, the school just adopted a set of general education requirements that now includes a “digital intensive” course requirement with the goal of developing digital fluency. That term is defined as “the ability to consume and produce digital knowledge critically, ethically and responsibly, as well as to creatively adapt to emerging technology,” according to the school.

Virginia and the mid-Atlantic represent a competitive region in attracting students, McClurken says. Other schools are growing and adding facilities and pitching themselves as the best bang for the buck. “We’re focused on a particular type of undergraduate education … integrating digital technology into a liberal-arts experience,” says McClurken. “That’s been our argument.”

Building the workforce
The UMW main campus is focused on undergraduates, but the school’s two other locations target the region’s adult workforce. UMW’s Continuing and Professional Studies program, located at a small campus in neighboring Stafford County, focuses on helping professionals pursue training or degrees to further their careers.

And to the east in King George County near the Naval Surface Warfare Center is a center focused mostly on science and engineering studies, for graduate and undergraduates, but its main emphasis is continuing education for Dahlgren-related workers, local government employees and private-sector workers. UMW shares that space with educators from other Virginia schools.

A major new initiative is coming. UMW is launching a cybersecurity certification prep course next year, supported by the region’s community colleges and business development groups. The 12-week, 40-hour program is expected to begin in spring 2020. In March, the state’s GO Virginia program awarded a $110,000 grant to help start the program, which is intended to ease the shortage of certified cybersecurity workers in the region.

The Stafford center also offers a bachelor of liberal studies degree for  people who have done some college work but haven’t completed their undergraduate degrees. “Many start school, then stop, then life happens along the way,” interrupting their degree pursuit, says Kimberly Young, executive director of UMW’s Continuing and Professional Studies program.

Evening classes and some online work is part of the program, but UMW advisers are keen to make sure the project feels like a true degree program. “It’s important for the Mary Washington brand that we’re not pushing them through something just to get to the finish line, but really taking a look at what they want to do,” Young says. 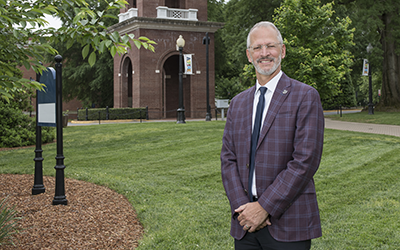 Even if UMW doesn’t aim to be a lot bigger, under Paino’s leadership it is going to grow and renovate. And for this modest-size campus, there are many new things planned or underway. In 2016 the school opened its massive University Center, which houses dining facilities and offices of university programs such as the James Farmer Multicultural Center. The former dining center, Seacobeck Hall, will soon be renovated and reopened as home to the school’s College of Education. Plus, renovations are planned or underway in several of the school’s older residence halls.

Farther down the road, Paino is talking up proposals to build a new theater at the southeast corner of the campus and a parking garage across the street on an existing surface parking lot. The existing theater, Klein Theatre, and the adjacent fine arts buildings would be renovated. Plus, the new theater space potentially would also be used by the city of Fredericksburg.

Paino is also pursuing plans to demolish and rebuild the UMW Apartments on William Street at the south end of campus. The complex houses about 350 students but would be expanded and possibly include some mixed-use development.

For now most of the activity is at the other end of the campus, extending across U.S. 1 to the Eagle Village shopping center, which has residence halls and some of UMW’s administrative offices. That property is owned by the UMW Foundation. “Our vision is really to create some activity and space on this side as well,” Paino says. He wants the school to provide “21st-century living and learning.”

In five years the estimate is that UMW will see modest growth to around 5,000 students across all its programs. “The direction I’m trying to take the university is [to become] an anchor for the entire region and Fredericksburg in particular,” Paino says. “There’s a lot going on here.”