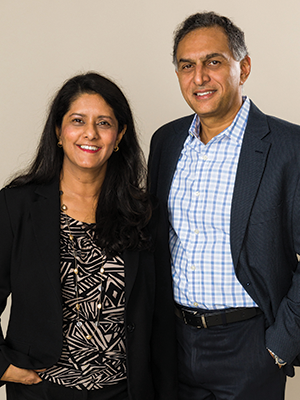 What would you have been if you hadn’t become an architect?
Rohit: a professional cricket player
Smita: a foreign-service officer.

What’s on the nightstand?
Rohit: The Wall Street Journal
Smita: “All the Light We Cannot See.”

As principals of a large architectural firm, Rohit and Smita Anand of the Tysons office of KTGY have their fingerprints on lots of projects. The impact of their firm can be spotted from the Washington suburbs to a new development in Reston.

In the multifamily sector alone, Rohit Anand estimates that he has built more than 20,000 rental units during his long career.

The husband and wife team are central players in KTGY, an international architectural firm with about 400 employees and offices as far-flung as Denver and Pune, India. KTGY has won hundreds of awards, including the Great American Living Awards for Best Design and Architecture in 2016 for developments in Stafford, Manassas, and the Potomac Yard district of Alexandria.

The Anands strive to bring a fresh vision to the firm’s designs. “A lot of stuff looks and feels the same,” says Rohit, whose focus is multifamily dwellings. “But an apartment is not a commodity, a product. It has to work in a particular location for a particular tenant. It has to be meaningful.”

Smita tries “to push boundaries,” too, she says in plans for single-family residences. She views town houses and stand-alone homes as a “stage, a setting in which different events happen.” 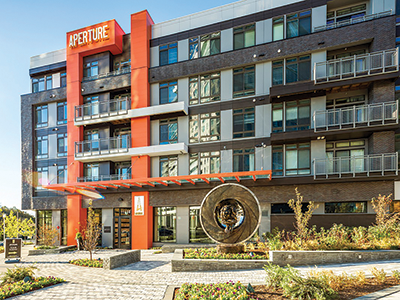 The Aperture in Reston is an example of the Anands’ approach. Rohit envisioned the 421-unit luxury apartment building as a home for older millennials, now hitting their 30s, and younger Generation X’ers in their 40s, and he made sure that it checked all the boxes to attract those age groups.

The Aperture has easy transit access, sitting across the street from the Wiehle-Reston East stop on Metro’s Silver line. It brims with trendy amenities, such as an outdoor kitchen, dog park and the kind of open gathering spaces where millennials expect to mingle. A striking lobby with a bronze and stainless-steel sculpture and a dramatic double elliptical staircase gives the project flair. Like many developments near mass transit, plans for this area of Reston include 1.3 million square feet of mixed uses that will eventually include office buildings, restaurants, shops and a hotel.

Smita’s new town houses at Crown Farm in Gaithersburg, Md., catch the eye as well. With their off-center windows and mix of heights and surfaces, they resemble a playful jumble of children’s blocks. In another recent project, The Brownstones at Chevy Chase Lake in Chevy Chase, Md., Smita tries to incorporate “the notion of wellness,” she says, by including ground-floor bedrooms for aging in place, spa baths and exercise rooms, and integrated indoor and outdoor spaces.

Jeff Kayce, senior vice president and managing director of the Bozzuto Group, a Maryland-based real estate development company that has worked with KTGY on The Aperture and other developments, has high praise for the firm’s Tysons office.  “Rohit’s team believes in great design and that has proven out in a variety of projects.”

Natives of India, the Anands met as undergraduates at the Indian Institute of Technology. Both then pursued master’s degrees in architecture in the U.S. – Rohit at Virginia Tech, and Smita at UCLA. The couple has two children, ages 19 and 24.

Running a busy architectural firm doesn’t leave a lot of leisure time. When they aren’t working, Smita enjoys hiking and trying new restaurants, while Rohit is passionate about golf and tennis and watches a lot of cricket on TV.

Being together at the office as well as at home might be a strain on some marriages, but the Anands seem to have it figured out.

“Over the years, we have built up a degree of honesty,” Rohit says. “We can be professionally critical about the work without fear of offending.”

For this pair of architects, that development has to be as satisfying as any they have crafted out of bricks and mortar.

US Foods will nearly double its space in Prince William County