A couple years ago Virginia Commonwealth University business student Calvin Peterson missed an entire semester after developing a pressure sore from sitting too long in his wheelchair without changing positions. The injury was so severe that bone protruded through his skin, requiring surgery.

“When you’re in a wheelchair, you know you’re supposed to shift every couple of hours — some doctors say every 15 minutes — but you forget. If you’re very active and busy, it completely slips your mind to remember to shift,” explains Peterson, a native New Yorker who was paralyzed from the waist down after a gunshot wound.

A graduate of VCU’s entrepreneurship program, Peterson, 31, has started a company with two fellow VCU grads, Kaitlin Taylor and Wayne Pitts. They’re in the process of filing patent papers and raising money to develop a prototype for an affordable, automated wheelchair cushion that will prevent pressure sores by periodically changing the air pressure in cells within the cushion.

The trio developed the idea to enter VCU’s Venture Creation Competition last year and won the $4,000 grand prize for undergrads.

Universities across the country are turning students into entrepreneurs through competitions that require participants to pitch their product or business to a panel of judges. Many of the contests offer cash prizes that students can then invest into a startup business.

In fact, entrepreneurship competitions are so popular that the state government has announced plans to host its first Governor’s Business Plan competition, with $1 million in prizes. Overseen by the Office of the Secretary of Commerce and Trade, the contest begins this spring, and finalists will be announced in the summer. It aims to encourage innovation in the fields of agriculture, bio-life sciences, cybersecurity, energy and social entrepreneurship.

On the university level, most entrepreneurship contests have students pitch their ideas to a panel of judges, akin to ABC’s popular “Shark Tank” TV show. The contests tend to be multidisciplinary and open to all students, undergraduate and graduate.
“Entrepreneurship is a team sport, and it connects across all disciplines,” says Ken Kahn, director of VCU’s da Vinci Center for innovation in product design and development. Developing any company takes people with a variety of skills, such as technology, marketing, engineering and graphic design. “It’s very much a group effort to bring an idea forward,” Kahn says of the entrepreneurship competitions.

Many of the university contests award cash prizes to students, but not all universities think that’s the best approach.

For instance, Virginia Tech’s Global Entrepreneurship Challenge Semifinals awards scholarship money. “The prizes … are not seed-fund money,” says Jim Flowers, executive director of VT KnowledgeWorks, which runs the contest. “It is not our purpose to create businesses out of that contest. It is to give students education in entrepreneurial behaviors and techniques … If you cast the thing as a startup contest, students tend to drop out of school and start the business. So is the point to cause that or is the point to keep them in school and learn some entrepreneurship skills so that later they can apply those in a more aggressive and effective way?”

The team that wins Virginia Tech’s student entrepreneurship contest does go on to compete in the university’s Global Entrepreneurship Challenge, which awards $40,000 in cash prizes and is open to university students worldwide. However, in the competition’s five-year history, none of the hometown teams from Virginia Tech has won the global challenge.

Joseph Linzon, 21, a senior at the University of Virginia’s McIntire School of Commerce, acknowledges that he briefly considered taking a leave of absence from school to work on his startup company, PowerSole.

A Toronto native, Linzon took second place in U.Va.’s 2011 Entrepreneurship Cup (or E-Cup) contest, winning $10,000 for his idea for PowerSole, a shoe that powers an electrical battery from the wearer’s kinetic energy. He used the money to file for initial patents. PowerSole later won U.Va.’s Galant Challenge, which connects startups with investors. That contest led to PowerSole gaining $200,000 in equity investment, as well as finding a professional to help run the company so that Linzon could focus on finishing his degree.

With PowerSole, a wearer can build enough battery power to fully charge a cellphone or GPS device after wearing the shoes for about six hours. Linzon was inspired to create PowerSole after volunteering in Peru in 2010. “I saw how society was affected by not having access to electricity. I found an individual whose business depended every day on his cell phone, but the [electrical] infrastructure was so poor he couldn’t depend on it.”

Now Linzon is seeking a company to license his product. He hopes that PowerSole will operate on the same model as Internet retailer TOMS, which donates a pair of shoes to the needy for every pair of shoes it sells.

Linzon credits the E-Cup and Galant contests with sparking his love for entrepreneurship. He’s also now a partner in a startup restaurant, Roots Natural Kitchen, in Charlottesville. 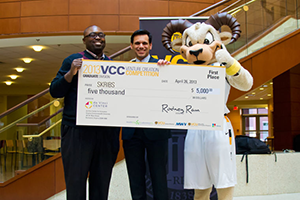 Success at an entrepreneurship competition also helped shape the future for Tumi Oredein. Oredein, 28, won VCU’s Venture Creation Competition in 2013 with an idea for a dry-erase wristband for children called SKRIBS. That led Oredein to win Wal-Mart’s 2013 Get on the Shelf competition. He later sold the licensing right for SKRIBS to a Richmond company.

Now Oredein works as assistant manager of product development for Toys R Us, overseeing global product development for the toy retailer’s Bruin line of toys for infants and preschoolers. “It’s the same thing I did with SKRIBS, just on a lot higher level,” he explains. “Every season we have like 15 or so new products we have to develop or source or figure out how to bring to market.”

A graduate of U.Va.’s mechanical engineering program, Oredein earned a master’s degree in entrepreneurship from VCU in 2014. Before attending VCU and entering the entrepreneurship competition, “I had no real background in product development,” Oredein says. “I was just doing research in biomechanical fields. I had no business sense. I had no ideas about invention and other types of innovation … Without the experience of winning the competition … I wouldn’t have been looked at by Toys R Us.”