Home News A breakthrough for Inova?

A breakthrough for Inova?

Inova’s most recent multimillion-dollar push to become a national leader in the rapidly growing field of genomic health research and personalized medicine represents, in part, a personal crusade for CEO J. Knox Singleton.

Singleton was speaking at a news conference announcing that, after almost three years of off-again-on-again negotiations with Exxon Mobil Corp., Inova would at first lease, then buy the 117-acre office campus directly across the street from its flagship Gallows Road hospital. The total price will be $180 million.

The Exxon Mobil property will be the home of Inova’s new Center for Personalized Health. Its first two principal tenants will be the Inova Translational Medicine Institute (ITMI) and its Inova Comprehensive Cancer and Research Institute (ICCRI).

The oil company announced in 2012 that it planned to transfer 2,100 jobs from Fairfax to Houston by 2016. The fenced campus it’s leaving features a one-mile, paved loop trail dotted with benches where walkers and joggers can rest under a canopy of towering hardwoods. The campus has a fitness center, an indoor lap pool and covered parking for more than 2,000 vehicles. It contains 1.2 million square feet of offices, conference rooms and sun-drenched common areas in four large glass-clad buildings.

Inova, Northern Virginia’s dominant health system, envisions the property will serve as a magnet, if not an incubator, for pharmaceutical companies, university medical school researchers and scientists from around the world. They would develop medications and clinical treatments that can be genetically tailored to individual patients in fighting cancer and other illnesses.

In fact, a video that the company did not produce but posted to YouTube within days of its February announcement reported that the massive parcel’s current zoning would allow an additional 555,000 square feet of office space on its 92 undeveloped acres. The video even provided images of several different building configurations.

In 1983, Huntington’s disease was the first illness to be mapped by geneticists. The Cystic Fibrosis gene mutation was discovered in 1989, and a year later scientists first identified the BRCA1 gene mutation, the suspected root of many breast and ovarian cancers.

The lure and potential business success of “translational” or “personalized” medicine  — in which researchers and doctors use the genetic mutations from populations of sick patients to help them develop more effective medications —  has grown rapidly since the first phase of the international Human Genome Project was completed in 2003.

Researchers for the first time got access to the codes of tens of thousands of individual human genes. During the last decade, the cost of thoroughly mapping and analyzing a single patient’s genes for mutations that might cause an illness has dropped dramatically — from tens of thousands of dollars to just a few thousand.

In 2009, a report by PwC estimated that the personalized medicine market in the U.S. would grow from $232 billion to $452 billion by the end of this year.

Two of the largest research categories funded by the National Institutes of Health (NIH) are genetics and the human genome.

In his most recent State of the Union address, President Barack Obama announced plans to launch a federal Precision Medicine Initiative aimed at gathering genetic information and medical histories from 1 million American volunteers in a national database that medical researchers can study. In his 2016 budget proposal, Obama asked Congress to approve $215 million for the project, with $130 million set aside for NIH to coordinate several different ongoing initiatives around the nation.

At the February news conference, Gov. Terry McAuliffe praised Inova for the investments it is making to help transform the economy of Northern Virginia, from one that had been dependent on defense spending to one focused on science and medicine.

“The new campus will be a focal point for investors and industries such as [pharmaceutical manufacturing], tech and life-science companies,” McAuliffe predicted. “This center will be on the cutting edge of health-care delivery, and it will be at the very heart of the new Virginia economy.”

Singleton, however, tried his best to keep the focus personal. “It’s about our families, ourselves, our loved ones and,” casting a polite glance at McAuliffe, “it’s about jobs and prosperity. The beauty is they all go together in this setting … It doesn’t get much better than that.”

Five-year turnaround
The money Inova has reportedly spent in the last 36 to 48 months and is expected to spend in the next decade to become a national leader in the field of genomic medicine has jumped dramatically since its first, abortive attempt in 2009.

The company announced that year it would provide $25 million in seed money so that Dietrich Stephan, a well-known researcher and genomic medicine entrepreneur, could build the Ignite Institute for Individualized Health, a 300,000-square-foot, $250 million genomic health-care center in Fairfax County.

In 2010, Inova withdrew its offer after an unnamed corporate investor backed out of a $25 million verbal commitment to the project because of poor market conditions, according to The Washington Post.

Company spokesman Tony Raker recently explained in an email, “Inova was working with Dr. Stephan as one of the first partners in his Ignite Institute.  However, over the following year, it became clear that the Institute couldn’t generate additional partners which prompted Dr. Stephan’s relocation and, naturally, our withdrawal.”

Inova began work to build its own center from the ground up. It launched its translational medicine institute (ITMI) in 2010, hiring Dr. John Niederhuber, the former director of the National Cancer Institute, to run it.

Inova had spent $150 million through the end of 2014 on the ITMI and plans to spend at least $400 million on the new facility, according to the Washington Business Journal. (Inova officials declined to comment on the company’s current investment total or its budgets for the development of genomic programs.)

The plan, according to company officials, is to establish Inova as a destination health-care facility, much like the Mayo Clinic in Rochester, Minn.; the Memorial Sloan Kettering Cancer Center in New York City and Johns Hopkins Hospital in Baltimore.

Clearly, one of the most expensive pieces of Inova’s long-term growth strategy in genomic medicine and cancer research is the purchase of the Gallows Road campus from Exxon Mobil. By the time the deal was announced, the long-awaited transaction was almost old news to Northern Virginia commercial real estate veterans. 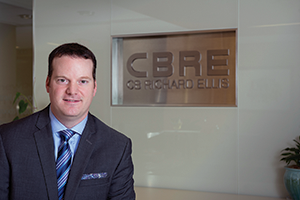 “I don’t think it was too surprising. It made all the sense in the world to expand across the street to that campus,” said W. Carter Byrnes, first vice president with the CBRE/Health Care Services Group. “They were always seen as one of the leading candidates to get that location. Overall, ever since it was put on the market, Inova was considered to be the leading bidder for that facility.”

Other brokers and developers say the CIA and the FBI also may have approached Exxon Mobil about buying the Gallows Road campus to expand their operations. Rumors of their interest in the property were widespread.

But once sequestration — across-the-board-spending cuts on all federal agencies mandated by the 2011 Budget Control Act — began to bite, the federal government apparently dropped its interest in its property. That development may have forced Exxon Mobil to initiate more serious and exclusive negotiations with Inova. (Exxon Mobil spokesman Todd Spitler said his company would not comment “on the details of proprietary commercial transactions.”)

Millions more for renovations
In late 2013, about a year before Inova concluded its negotiations with Exxon Mobil to buy its new Merrifield campus, the health system had won approval from Fairfax County officials to construct a new building with more than 250,000 square feet of offices and labs on property less than a mile north of the Inova Fairfax Hospital campus. In 2012, according to news reports citing Singleton and other senior executives, the company had budgeted $250 million for the cancer research center.

However, construction on the cancer center, scheduled to begin in 2014, was suspended until sometime this year, according to published reports. That delay led some local real estate brokers to speculate that, after many months of negotiations, Inova and Exxon Mobil were finally close to a deal on the Gallows Road property.

Now that Inova has agreed to spend an initial $180 million for its new personalized medicine campus, the health-care system must decide how much more it wants to pay to refurbish part, if not all, of the 1.2 million square feet of the new space it will soon own.

While Inova officials are mum on most of the details surrounding the project, local developers and real estate brokers speculate the company will use 200,000 to 250,000 square feet of the new property for its crown jewel, the Comprehensive Cancer and Research Institute.  Inova is at least a year behind its original schedule on breaking ground for the facility.

“If you’re looking to converting an office to a medical or research type of facility, it’s almost a complete gut and rebuild, because there is a significant amount of additional plumbing and infrastructure that you have to build into the space and that involves core drilling into the floors that involves significant cost,” says Byrnes of CBRE.

Converting space once devoted to traditional offices and conference rooms to the sophisticated, life-science laboratories can get expensive. Laboratories and clinical health-care settings must have specialized plumbing systems, so-called “single pass” HVAC units and other safety features to properly handle potentially infectious biological material. Together they must be stringent enough to meet the licensing requirements of the U.S. Food and Drug Administration and other regulatory agencies.

Using as an unofficial guide the $1,000 per square foot construction budget for a cancer research facility already approved by Fairfax County zoning officials, some industry experts say Inova is likely to spend somewhere about $200 million to $250 million in construction renovation expenses for the ICCRI alone.

Converting, over time, the remaining 1 million square feet of the new campus from the design aesthetic of an old-economy oil company to 21st-century life-sciences and health-care company — and selling that image to clients, corporate partners, university researchers and philanthropic donors — will be far cheaper but still cost Inova millions of dollars more.

CBRE’s Byrnes says refurbishing standard office space to medical offices now costs “$80 to $100 [per square foot] on the low to midsize end” in the Washington, D.C., region. He says a good starting point for the quality finishes and high standards Inova usually demands for its offices should begin at about $120 per square foot. “It will get more expensive as the years go on,” he says. 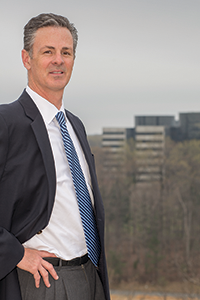 In total, “I could see them spending $400-$500 million … easily, within four or five years” on remodeling and refurbishments at the Gallows Road campus, says Brian Fitzgerald, a board member of the Commercial Real Estate Brokerage Association of Greater Washington, D.C.

Inova officials would not say how they plan to pay the $180 million they will need for the Exxon Mobil campus or the renovations and refurbishments the property’s four office towers eventually will need.

But financing shouldn’t be much of a problem. The market leader in Northern Virginia health-care appears to have more than enough to pay for just about anything it wants.

At the beginning of this year Inova reported it had $4 billion in unrestricted cash and investments, with $2.6 billion of that available for use within three days.