Nearly 400,000 Virginians are still unemployed following the economic fallout from the COVID-19 pandemic, though the number of initial jobless claims in the commonwealth continues to decrease.

About 31,000 Virginians filed initial claims for unemployment last week, down from roughly 49,000 the prior week, according to the Virginia Employment Commission (VEC). The state’s weekly unemployment numbers have continued to decline since peaking in early April, when 147,369 Virginians filed initial jobless claims in a single week. Last week there were 7,863 fewer claimants.

More than 1.8 million people in the United States filed initial claims for unemployment last week, according to U.S. Department of Labor statistics, bringing the total of unemployed Americans to nearly 43 million in the wake of the economic crisis.

Last week’s U.S. claims were down by 249,000. In the week ending May 16, 35 states reported that 10.7 million people are claiming federal Pandemic Unemployment Assistance, which provides temporary benefits for people who are not eligible for regular or traditional unemployment insurance.

In Virginia, 190,915 filed the Pandemic Unemployment claims, according to the VEC, 8,685 of which were initial claims.

The regions of the state that have been most impacted continue to be Northern Virginia, Richmond and Hampton Roads. In Hampton Roads alone, 6,590 people filed initial claims.

“We are starting to see the bottom of the first wave of layoffs in Hampton Roads,” Robert McNab, director of Old Dominion University’s Dragas Center for Economic Analysis and Policy, said in a statement. “While initial unemployment claims remain historically high, continued claims have fallen two weeks in a row. As Hampton Roads moves into Phase II of reopening, we can expect this trend to continue in the coming weeks. A sustained recovery will take time, especially in the travel and tourism, restaurant and retail trade sectors.”

“The region’s dependence on tourism will mean a greater initial economic impact and, most likely, a longer recovery relative to other regions in the commonwealth,” Dominique Johnson, a Dragas Center research associate, said in a statement. “We continue to project that the unemployment rate in the region is likely to approach 18% in May.”

Below are the top 10 localities, listed by number of initial unemployment claims, for the week ending May 30:

This is the first week since the pandemic began that some of the top 10 localities dipped under 1,000 initial unemployment claims.

Twenty-eight states reported 209,692 individuals claiming Pandemic Emergency Unemployment Compensation, which provides up to an additional 13 weeks of regular or traditional unemployment insurance benefits to those who have exhausted their eligibility.

The seasonally adjusted insured unemployment rate was 14.8% for the week that ended May 23, a 0.5% increase from the previous week.

The states with the highest insured unemployment rates for the week ending on May 16 were Nevada, Maine, Michigan, Puerto Rico, Hawaii, New York, Rhode Island, Washington, Louisiana and New Hampshire.

States with the largest increases in initial claims for the week that ended on May 23 were Maine, Oklahoma, Michigan, Kentucky and Oregon, while the largest decreases were in Washington, Florida, California, New York and Illinois.

This story will be updated to reflect Virginia statistics, when available.

Community colleges, businesses partner to get Virginians back to work 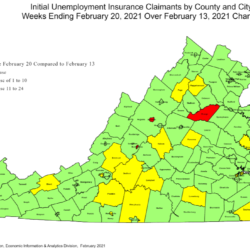