250 acres on Richmond-Chesterfield border for sale at $79M

The director of Chesterfield County’s economic development office says a “major midtown development” could result from the sale of nearly 250 acres of undeveloped property in the county and the city of Richmond. The two pieces of land are now on the market for $30 million and $49 million, according to S.L. Nusbaum Realty, which is handling the sale.

Parkway Crossings of Richmond — 82.5 acres in the city’s Gravel Hill area, just east of Chesterfield’s Bon Air neighborhood — is the largest available, privately-owned parcel that remains undeveloped in the city, with the price set at $300,000 per acre, according to the realty company. It was the proposed location of a $650 million Bally’s Corp. casino rejected this spring by a city advisory panel, which instead picked ONE Casino + Resort, now under consideration by Richmond voters.

The second property — 166.44 acres in Bon Air at the intersection of Powhite Parkway and Chippenham Parkway —  is the largest, privately-owned parcel closest to downtown Richmond, the realty company said in a news release. It has been zoned to accommodate more than 1 million feet of office, retail and hospitality space, as well as multifamily residential buildings. It is zoned for office and retail but it will require rezoning to move forward as a mixed-use project. The zoning is no longer compatible with the development potential of the site.

Garrett Hart, Chesterfield’s economic director, likened the potential for development on the land to what Buckhead is to Atlanta and Tysons to Washington, D.C.

“What we envision is a major midtown development,” he said. “It’s gonna take somebody really big [to develop it]. It’s a significant piece of property, because it is a large amount of land and central to the edge of the city and Chesterfield County.”

The property is about 15 minutes from most locations in the Richmond region, Hart said, including the airport.

“This land has been owned for decades by a local development investor here in Richmond,” said Nathan Shor, a senior vice president and regional manager with S.L. Nusbaum Realty. “He has assembled these parcels and worked on planning the future development of the parcels with the different municipalities. He has determined that now is the time to market these large parcels due to the historic development cycle we currently find ourselves in around the greater Richmond market.”

The property was once planned to be the site of a major mall known as the Galleria and was zoned for office and retail, but that plan fell through decades ago, Hart said.

Shor, Larry Agnew and Austin Newman are representing the seller, the Richmond-based entity Development Associates of Virginia LLC, which is registered by GSC, a property management firm owned by Jonathan Perel, a developer and owner of multi-tenant buildings all along the east coast.

In 2014, about 170 acres of the same stretch of land — all of which was in Chesterfield County — were put up for sale by HMK LLC, another limited liability corporation associated with Perel. He previously tried to develop the property but ran into objections by nearby residents over wetlands and home values, and the property remains in his hands, according to county property records. Neighbors also objected to the casino proposal earlier this year.

Hart said Monday he does not think the land will be snapped up quickly.

“We see it as a great opportunity for a really dense high-story development,” he said. “Is it the right time for that right now? I’m not sure. Is it going to be right for that? Yes … the casino and because of the money involved … probably made it possible to do that style of development sooner rather than later.” 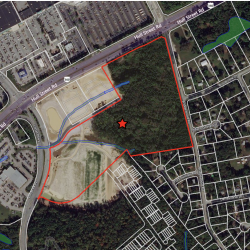 The land is at Hull Street Road and Route 288