Midterms seen as win for Dems, loss for Trump

On balance, Democrats came out winners in the 2022 midterm elections, having staved off a widely forecast “red wave” of Republican victories, according to panelists at Virginia Business’ annual Political Roundtable, held Wednesday, Nov. 9, in Richmond.

The idea of a red wave or “red tsunami” was “perhaps … a bit of a myth … largely created by the media,” noted Amanda Wintersieck, associate professor of political science at Virginia Commonwealth University. Political scientists, she said, weren’t predicting overwhelming Republican victories — despite inflation being at a 40-year high and President Joe Biden’s approval ratings remaining low.

Ahead of the midterms, political prediction markets like Predictit.org, she added, indicated that control of the Senate was a toss-up, leaning toward Democrats, and that Republicans were slightly favored to regain control of the House.

Control of the two bodies has not yet been determined, though it appears likely that Republicans may gain control of the House. Meanwhile, the balance of power in the Senate could hinge on on an early December runoff race in Georgia between Democratic incumbent U.S. Sen. Raphael Warnock and Republican NFL all-star Herschel Walker.

“Southeastern Pennsylvania, the very suburban area outside of Philadelphia, where there’s a lot of highly affluent, college-educated white voters who tend to be more socially liberal — Oz really needed those voters,” Nolte said. “He was not going to get Trump numbers out of the Trumpy areas of Pennsylvania.”

Habeeb added that “candidates really, really matter” in terms of appeal. “We live in a very 50-50 country. I think [2021] redistricting did have a role in lots of states at the House level, although it nets out because there’s pluses and minuses for each party.”

In any event, Habeeb said, the midterms “did not become a referendum on Biden.”

The U.S. Supreme Court’s June ruling overturning Roe vs. Wade did motivate some voters, panelists said, as did feelings about Trump and the false “stolen election” narrative.

“The Democrats, looking at economic anxiety, high inflation, and the relatively middling evaluation of Biden, had a problem if the conversation was about the economy,” Farnsworth said, noting that Trump and abortion were “two different narratives [for Democrats] to choose from.”

In Virginia, political watchers had their eyes on three heavily contested House races in which incumbent Democrats Elaine Luria, Abigail Spanberger and Jennifer Wexton were defending their seats in redrawn districts. Spanberger and Wexton won their races by a few points, while Luria lost in Hampton Roads to Republican state Sen. Jen Kiggans.

Speaking about midterm trends, Dyke added, “With all these election deniers, from what I’ve been able to see is [that] most of those have gone down to defeat because, hopefully, people recognize that preserving our democracy is very, very important.” 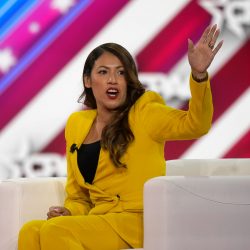 Virginia is bellwether in midterm elections 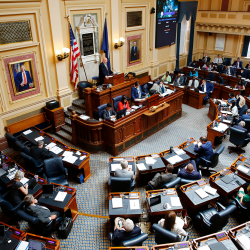