Representing sectors ranging from data analysis to pharmaceuticals to fashion, these visionary trendsetters keep the Old Dominion from getting stale.

Growing up in Seattle, Jason Crabtree was more likely to be found raising and showing Angus cattle than stuck inside on a computer. But now his career revolves around data. With 220 employees, Qomplx has grown “hundreds of percent” in each of the last two years, he says. It closed on $78.6 million in Series A financing in July 2019. A West Point graduate, Crabtree met Qomplx co-founder Andrew Sellers while attending the University of Oxford to study engineering science on a Rhodes Scholarship. Both were in graduate programs while on active duty. “Risk is really just a consequence of dependence,” says Crabtree, who served as an infantry officer in Afghanistan. Qomplx helps companies manage risk, making sense of data to drive decisions. Crabtree aims to help clients navigate “what I think will be an increasingly turbulent century.”

Tom Deierlein saw a pandemic hit in the year his company marked its 10th anniversary. In response, ThunderCat Technology entered a new arena, partnering with UV Angel Inc. to offer germicidal ultraviolet light products to health care facilities. Six months later, ThunderCat announced that it became one of 31 contractors to win part of a $13 billion, 10-year contract to provide information technology enterprise solutions software to the U.S. Army. A West Point graduate and retired U.S. Army major, Deierlein received a Bronze Star and Purple Heart for his service in Iraq, where he was shot by a sniper. He also runs TD Foundation, a nonprofit he co-founded to help families and children of veterans who were wounded or died in service.

If you hadn’t noticed from the new iPhone, 5G is having a moment. Luiz DaSilva, the Bradley Professor of Cybersecurity at Virginia Tech, is immersed in the wireless networking technology. In October 2019, he was tapped as the first executive director of Virginia’s Commonwealth Cyber Initiative, which is based at the Virginia Tech Research Center in Arlington. DaSilva and his team deployed the first 5G research testbed in Virginia this year, he says. Next year, the project will expand outdoors “to support connected vehicles, drones, ports and warehouses and smart cities.” DaSilva, who co-authored the book “Game Theory for Wireless Engineers,” also aims to launch an AI testbed in 2021.

When Dr. Eric Edwards started working with Frank Gupton on a venture in spring 2019, little did they know how prescient their goals would be. Edwards was helping Gupton, a VCU pharmaceutical engineering professor and CEO of the university’s Medicine for All Institute, to address drug shortages. “Fortuitous,” Edwards calls it. Because when COVID-19 hit, the need to secure, protect and repatriate the supply chain of essential, vulnerable medicines was heard loud and clear. The Trump administration awarded Edwards’ startup, Phlow Corp., with a $354 million, four-year contract in May. “It’s occurring lightning-fast,” Edwards says. R&D and manufacturing programs are up and running, and Phlow is building out a pharmaceutical hub that will bring more than 350 jobs to Petersburg.

It takes a bold attitude to wear the looks dreamed up by Charis Jones, she says. Big and vivid, her jewelry and handbags turn heads and lift revenue. This summer, her company, Sassy Jones, became the No. 1 Virginia company (and No. 75 overall) on the Inc. 5000 ranking of the country’s fastest-growing, privately held companies. Her e-commerce site has a 75% return customer rate, Jones says, compared with an industry average of about 30%. She serves the “professional, African American woman,” Jones says. What resonates with her customers? “It’s simply how it makes her feel,” she says. “We don’t sell jewelry; we sell confidence.” Sassy Jones builds bonds with innovative methods such as livestreams, dinners — and even a cruise to the Bahamas. The company recently made its HSN debut, and Jones will also be appearing on the HBO Max show, “Stylish with Jenna Lyons,” which debuts in December.

Josh Levi left a 20-year career with the Northern Virginia Technology Council in July 2019 to become inaugural president of the Data Center Coalition. The group was created to advocate for the data center industry in Virginia, which it says holds the world’s largest data center market. Levi, a graduate of Virginia Tech with a law degree from the University of Richmond School of Law, can draw upon his network built at the council, where he was vice president for policy. He has grown the association from six member companies to 14 data center owners and operators. In 2021, he says, the coalition will increase community engagement to focus on philanthropy, sustainability and workforce issues. 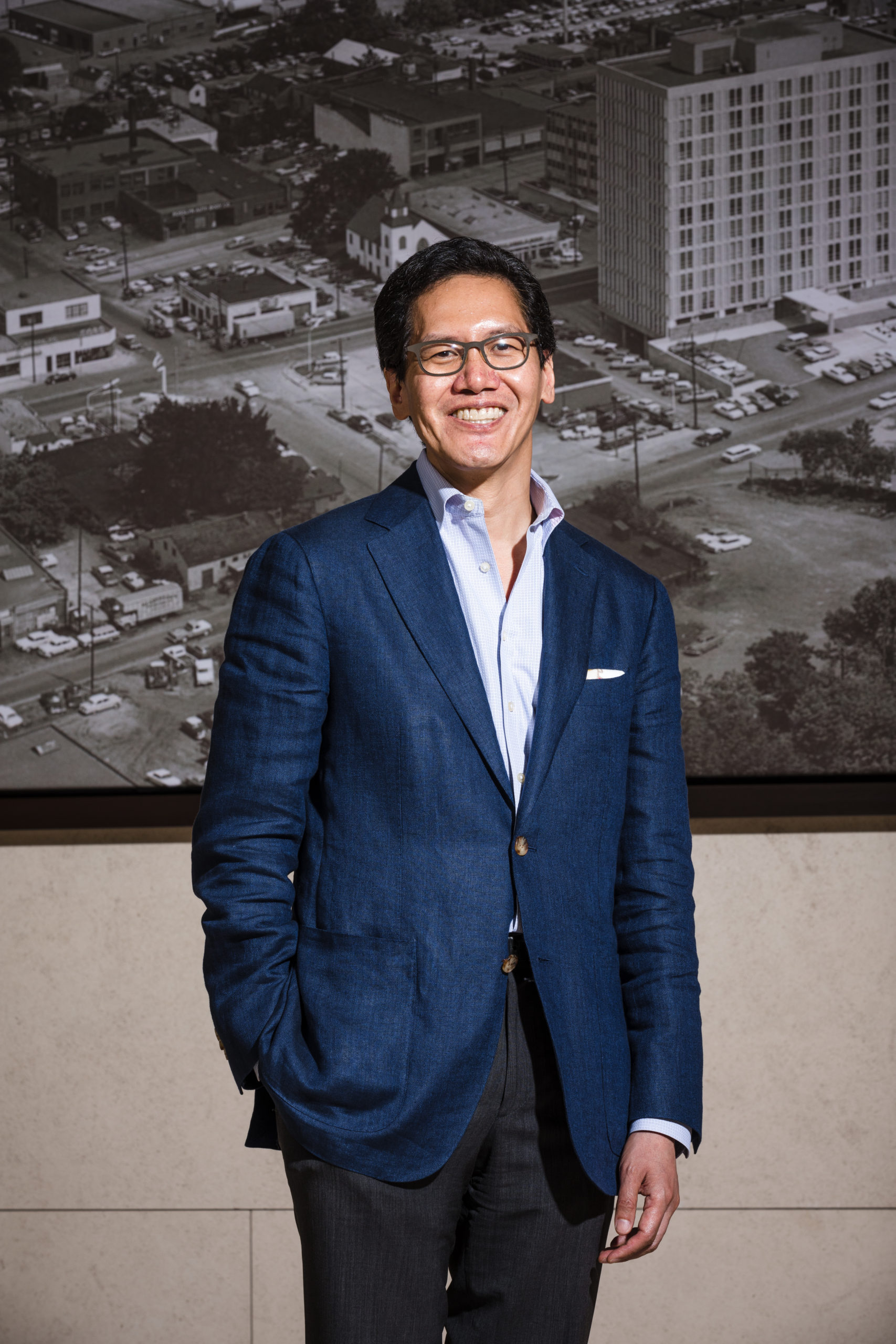 In a year when security and safety were put to the test, Haniel Lynn responded with the launch of KastleSafeSpaces in May. It leveraged the company’s internet of things and smartphone services to offer such features as hands-free opening of elevators and office doors, health screenings, contact tracing, and occupancy monitoring to prevent overcrowding. Lynn, a graduate of the University of Pennsylvania with an MBA from the Wharton School, joined Kastle Systems as CEO in November 2018. He came from a 16-year career at CEB, now Gartner, where he served as a group president. Kastle says it’s the largest managed security services provider in the country, maintaining security for more than 40,000 businesses.

Calling it “insurance for risk-takers,” Outside magazine named Buddy as one of “The Next-Gen Outdoor Innovations We’re Watching.” The on-demand accident insurance startup, founded by Charles Merritt and two fellow outdoor enthusiasts, is drawing attention for streamlining a typically burdensome process. Through the Buddy platform, customers can quickly purchase no-deductible, short-term insurance, with benefits paid directly to them. Merritt is a graduate of the University of North Carolina and the VCU Brandcenter. His company’s mission is “to help people fearlessly enjoy an active and outdoor life.”

Professor of medicine and vice chair for research of the Department of Medicine, University of Virginia
Charlottesville

Virginia and other states are laying the groundwork for the distribution of COVID-19 vaccines, understandably a topic of intense global interest. Dr. William Petri has been in the midst of vaccine research at the University of Virginia School of Medicine, where he studies immunology and molecular pathogenesis of infectious diseases. In a September article for The Conversation, in which he discusses his research and care for patients with the virus, he writes, perhaps presciently, that “it is likely that not just one but several of the competing COVID-19 vaccines will be shown to be safe and effective by the end of 2020.”

If you follow Michael Saylor on Twitter, you might know that he’s been tweeting nearly daily, and almost exclusively, about cryptocurrency since Sept. 15. That’s the day he announced that MicroStrategy, a business intelligence and mobile software company he co-founded, converted $425 million in cash holdings to bitcoin. In one tweet, he called it “the first true monetary network, spreading thru humanity like a cyberfire.” Saylor grew up in a military family, graduated from the Massachusetts Institute of Technology and joined the Air Force Reserve. He’s an inventor, author and philanthropist who draws audiences with his business ideas and outlooks. One of his latest perspectives, shared on Twitter: “The destiny of money is to be encrypted.”

Executive adviser to the commissioner,
Virginia Department of Health

Have you downloaded COVIDWISE? Great, Jeff Stover says: “Now you need to tell all your friends and neighbors.” Available on the Google and Apple mobile platforms, the coronavirus exposure-notification phone app is one of Virginia’s sharpest public arrows aimed at the coronavirus. Stover is at the helm of the program and its awareness campaign, which launched Aug. 5. In October, downloads were approaching 725,000. No location or personal data is tracked, but users notify the app if they test positive. Other app users whose phones have been near yours are notified anonymously. A Page County native, Stover says 2021 will bring a continued fight against COVID-19 while balancing other public health goals. “That’s going to be a dance.”

If you gazed upward in the Las Vegas area this fall, you might have seen one of Tom Walker’s drones delivering a COVID-19 self-testing kit from Walmart to a customer’s front porch. The pilot program, launched in September, completed about 500 deliveries by November. Walker, a U.S. Navy veteran, says DroneUp is the country’s fastest-growing drone company. Business, he says, has doubled, tripled, quadrupled and quintupled in the last four quarters. Walker worked with his wife, Dyanne, on their Web Teks software development company, which launched in 1999 and for which she serves as CEO. But 3½ years ago, Walker got into drones. Since the spring, DroneUp has helped governments and companies with delivery technology, adding to its service portfolio of inspections, analysis, property surveys and surveillance.